Tepezza is a treatment for thyroid eye disease (TED), which is sometimes known as Graves ophthalmopathy. The autoimmune disease is characterized by eye protrusion (bulging), swelling, inflammation, eyelid retraction, and other symptoms relating to the eyes. Approved by the FDA to treat TED in January 2020, the application of Tepezza medication involves an IV (intravenous) infusion. However, while Tepezza has been shown to be effective in combating the symptoms of TED, plaintiffs in the Tepezza hearing loss lawsuits claim there are dangerous Tepezza side effects. Most notably, hearing loss and other ear problems. Those launching the lawsuits against Tepezza’s manufacturers, Horizon Pharmaceuticals, have been backed up in their claims by a number of independent studies on the association between Tepezza and hearing loss.

Tepezza is a brand name for the generic medication Teprotumumab. It is used to treat thyroid eye disease, an autoimmune inflammatory disorder that causes swelling and protrusions of the eye area, as well as other linked symptoms. Tepezza gained FDA approval in 2020 after two studies showed it successfully reduced proptosis (eye protrusion) compared to placebo tests. However, it has been claimed that Tepezza can also cause hearing loss, tinnitus, and ear damage. Perhaps as many as 10% of those who have been given Tepezza have reported ear and hearing damage, and the claimants in the Tepezza lawsuits allege that the manufacturer, Horizon Pharmaceuticals, did not do enough to warn patients or healthcare providers about this dangerous side effect.

Thyroid eye disease (TED) is a relatively rare condition estimated to impact around 3 in 100,000 men and about 16 in 100,000 women. Roughly 3-5% of cases are deemed intense, causing severe pain and potentially leading to blindness. Tepezza was labeled a “first-in-class” medicine by the FDA, meaning it was considered a breakthrough therapy. To be clear, thyroid eye disease is not (for the moment) curable. Tepezza is used to treat the symptoms.

As of late 2022, law firms are calling for those affected by Tepezza injuries to come forward and file a claim. Tepezza lawsuits have already been launched, including a Tepezza hearing loss lawsuit on behalf of Daniel Weibel in the Northern District of Illinois. Claimants are not filing based on their personal experiences; they are backed up by the findings of independent studies on the Tepezza ear damage dangers. This includes a study published by the Endocrine Society in March 2021, which claimed that 65% of patients taking Tepezza might experience otologic (relating to the ear) symptoms. While, as mentioned, thyroid eye disease is relatively rare, the high rate of hearing loss, tinnitus, and other ear problems means a significant number of claimants could join those who have already filed hearing loss lawsuits against the manufacturer, Horizon Pharmaceuticals.

Most Common Side Effects of Tepezza - Updated

Approval for Tepezza was granted by the FDA in January 2020. Other thyroid eye disease drugs and treatments exist, but Tepezza was hailed as a breakthrough medication. Indeed, the application for approval sought by Horizon Pharmaceuticals was given “Priority Review” status by the FDA, meaning it was fast-tracked for approval. However, a crucial point to consider is that Tepezza was initially given “Orphan Drug” designation. This is a strategy employed by the FDA when alternative treatments are not available. Essentially, it meant Tepezza was given a kind of preliminary approval status, and that it requires further clinical tests. It’s worth noting that the FDA now lists hearing loss, among several other side effects, as a possible adverse reaction for those taking Tepezza.

Long-Term Side Effects of Tepezza

Tepezza is a relatively new medication, having only been approved by the FDA less than two years ago. Thus, long-term Tepezza side effects might not become apparent for many years, or at least until more clinical tests have been carried out. However, we know that some potential side effects – like loss of hearing – could be permanent.

One of the most worrying aspects of Tepezza is the link to the treatment and hearing loss, particularly permanent hearing loss. In one study, up to 23% of participants experienced hearing loss after taking Tepezza. We should stress that many of these studies have a small sample size (due to the rarity of thyroid eye disease). Moreover, Tepezza is a new drug, so it’s not abundantly clear as to its impact on hearing loss over a longer period.

What are the symptoms of Tepezza hearing loss? Beyond the obvious – loss of hearing – those experiencing problems might have the following symptoms:

Please note that the symptoms of Tepezza hearing loss can also be considered Tepezza injuries in and of themselves. The current Tepezza lawsuits are open to anyone who has suffered ear damage due to having treatment with this medication, not just those who have suffered hearing loss. 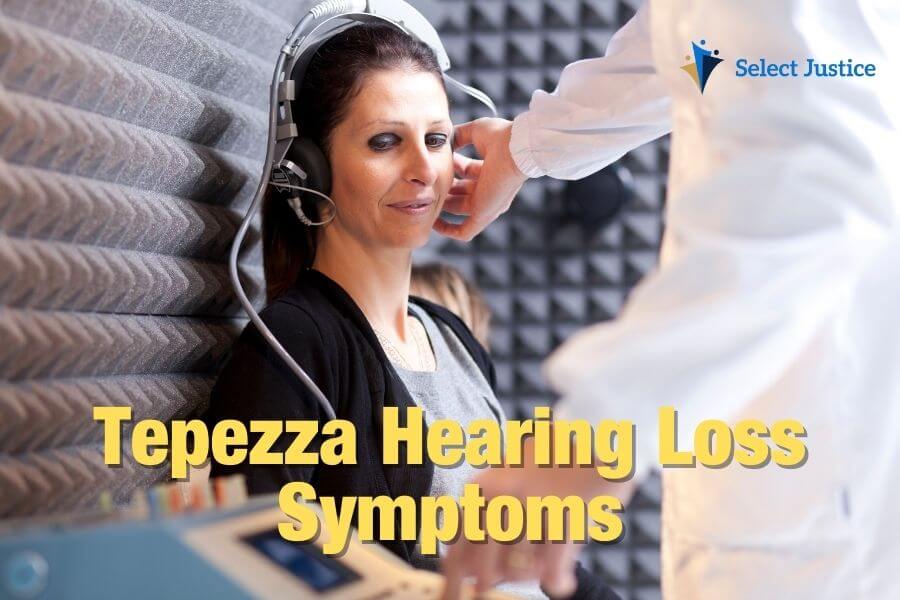 If you have been treated for thyroid eye disease with Tepezza and have suffered an injury, you may be entitled to compensation. Tepezza lawsuit lawyers are asking for more claimants to come forward, believing that this could become a nationwide litigation. Right now, Horizon Pharmaceuticals has been named as a defendant in existing lawsuits, and Tepezza injury law firms hope that more people coming forward will add to the weight of evidence against the company. If you believe you have been injured by Tepezza, you should contact a personal injury lawyer to see if you are eligible to pursue compensation.

The Tepezza lawsuits are still at an early stage, and it will likely be some time before they are concluded in the courts. As such, it is not clear how much claimants will receive for a Tepezza settlement. Much depends on the evidence provided in the court proceedings, including whether Horizon Pharmaceuticals knew Tepezza could cause hearing loss and whether the company was negligent. It is possible that Horizon Pharmaceuticals could settle out of court, agreeing to pay a sum of money to end the case without a trial. Right now, all of this is conjecture, however.

How to Join the Tepezza Lawsuit?

Law firms representing individual claimants have filed Tepezza lawsuits in states across the country. Going forward, depending on the number of claimants, it is possible that the cases will be consolidated into a class-action or multidistrict litigation. Thus, new claimants would join an existing group. For now, however, anyone wishing to learn more about Tepezza compensation should contact a personal injury lawyer for an evaluation and start their claim.

What is the Tepezza hearing loss about?

Tepezza is a drug used to treat thyroid eye disease. However, it seems to have a side effect that can cause hearing loss and other types of ear damage. Those pursuing compensation claim that the manufacturer of Tepezza, Horizon Pharmaceuticals, did not do enough to warn of this side effect.

What is Tepezza used for?

Tepezza is a relatively new treatment for TED (thyroid eye disease), which is also known as Graves’ ophthalmopathy.

How does Tepezza work?

It isn’t fully understood how Tepezza works, although we do know that it helps protect the muscles and fatty areas around the eyes from the body’s immune system, which can produce too much thyroid hormone in those with thyroid eye disease or Graves’ disease.

No. Tepezza is not chemotherapy. Initial research for the drug showed promise in treating tumors and cancers, but this was later discontinued.

Tepezza is the brand name for teprotumumab. It is produced by Horizon Pharmaceuticals, Inc. The company has been named as the main defendant in the Tepezza hearing loss lawsuits.

What is Tepezza made of?

Tepezza is a biologic medication, meaning it is (partly) composed of living organisms.

The full and long-term extent of Tepezza hearing loss side effects is not known. However, some of the claimants in the Tepezza lawsuits believe they have suffered permanent hearing loss.