Millions of Americans use Prilosec to treat complaints like heartburn and acid reflux. It is available either as OTC (over the counter) Prilosec without needing a prescription, but a doctor can also prescribe it for short- and long-term use. Prilosec is the brand name for omeprazole, a type of antacid drug referred to as a PPI (proton-pump inhibitor). As a treatment for digestive conditions, it is a popular alternative to Zantac (ranitidine).

However, 1000s of people allege in Prilosec compensation lawsuits that the drug’s manufacturers (Proctor & Gamble and AstraZeneca) have been negligent in producing and marketing a drug that can cause serious injuries. Moreover, those lawsuits allege that Prilosec’s producers knowingly misled the public, healthcare professionals and the authorities by concealing evidence of the Prilosec dangers. Among other diseases, long-term use of Prilosec has been linked to causing serious damage to the kidneys, strokes, heart failure, and bone fractures. 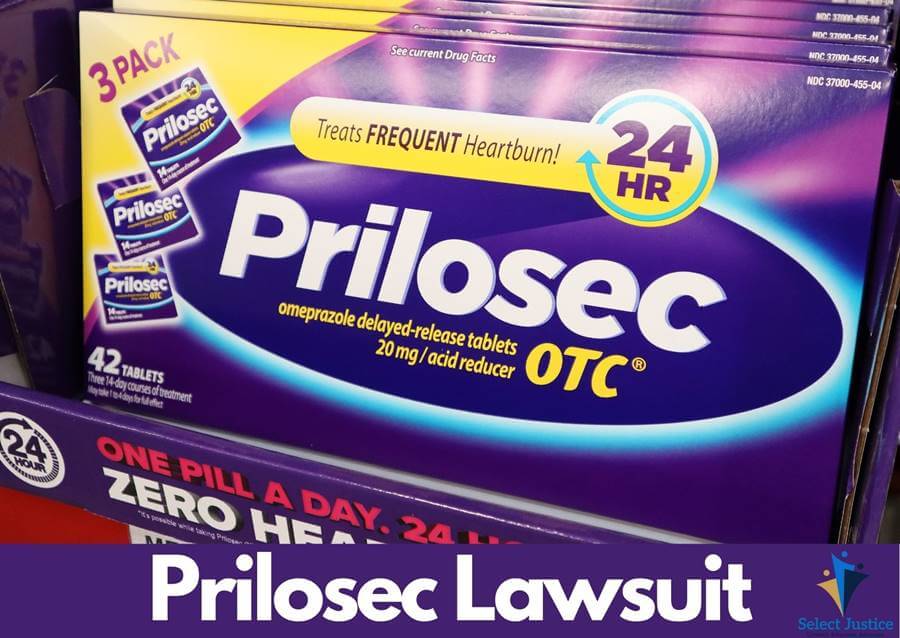 If you or a loved one were diagnosed with cancer or kidney damaged used Prilosec regularly, you may be entitled to compensation

There is emerging evidence that long-term use of PPIs like Prilosec may have links to cancer, particularly stomach or gastric cancers. While not always conclusive and sometimes disputed, several studies have shown a cancer risk associated with PPIs like Prilosec. Experts stress that short-term use of Prilosec carries little risk but are much more concerned with long-term intake of Prilosec and other PPI antacids. For example, Anthony Perre, MD, Chief of the Outpatient Division of the Cancer Treatment Centers of America, said:  “I think it’s really important to critically evaluate the need for a person to remain on a proton pump inhibitor long term.” The Prilosec cancer lawsuits allege that both AstraZeneca and P&G would have been aware of these studies, yet did nothing to warn long-term Prilosec users about possible cancer risk.

Common Prilosec side effects include headache, nausea, vomiting, diarrhea, stomach pain, gas, constipation and fever. If you experience any side effects like this, you should consult your doctor about your PPI treatment. However, the basis of the Prilosec lawsuits alleges that using the medication over a long period of time could cause much more serious side effects. These possible PPI side effects include gastric cancer, kidney disease, heart issues, and osteoporosis. 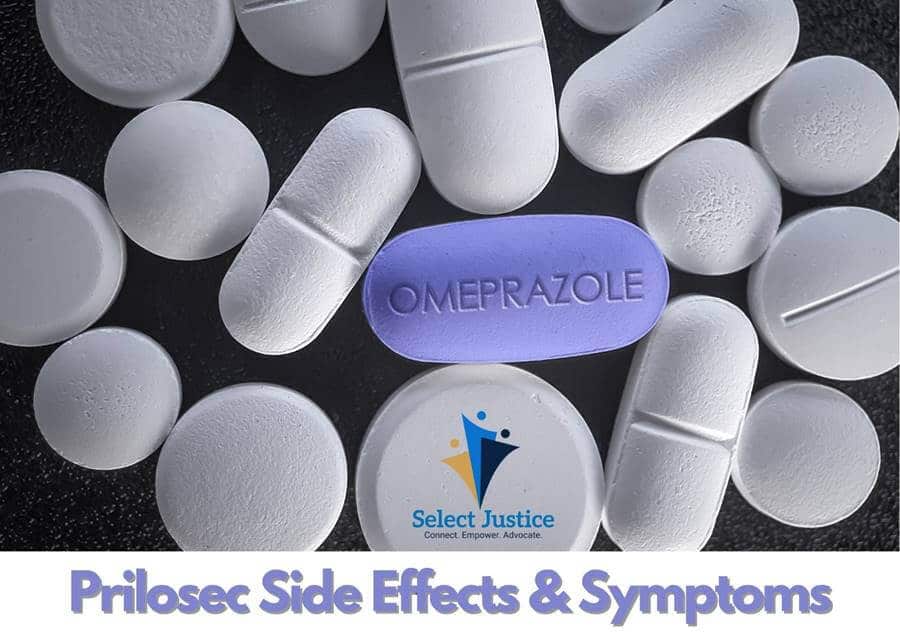 Most of the studies on Prilosec cancer risks have focused on stomach cancers, sometimes called gastric cancer. By using a PPI drug, you effectively prevent certain cells from producing acid (that’s why we call the drugs antacids). But some studies show that the stomach can react to this by causing another type of cell to produce gastrin (the hormone that produces gastric acid), and too much gastrin can cause tumors in the stomach. Again, while this remains a theory on the PPI cancer link, the Prilosec legal cases allege that the manufacturers were negligent in not warning patients and healthcare professionals of the possible link to cancer. Until any link is fully disproven, companies like P&G and AstraZeneca have a duty of care to make cancer risks clear.

One of the most common claims in the Prilosec antacid lawsuits is that taking the drug has resulted in kidney damage. In fact, one of the major studies on PPI kidney damage looked at patients with chronic kidney disease diagnosed between 2001 and 2008, and it found that almost 25% of these patients had taken PPI drugs. Later, a study released by JAMA (Journal of the American Medical Association) looked at the records of 10,000 patients and found that those who took Prilosec and other PPIs were 20-50% more likely to develop chronic kidney disease than those who did not.

As with kidney issues, a common complaint in response to long-term Prilosec use relates to osteoporosis, i.e., weakness and brittleness of the bones. Numerous studies have been conducted on the link between PPI medicines and bone strength. Some have suggested that the prevention of acid production in the stomach causes the body to absorb fewer of the nutrients needed for good bone density. Even if this only refers to small changes in bone strength and is not noticed in the short term, it can lead to severe consequences further down the line. If you or a loved one are suffering from bone injuries after long-term Prilosec use, you are urged to contact a PPI compensation law firm to begin your claim.

It’s important to recognize that there are two different types of Prilosec – OTC Prilosec and doctor- prescribed Prilosec. While they contain the same active ingredient (omeprazole), they are slightly different in their composition. The FDA points out that prescribed Prilosec treats diseases that require diagnosis by a doctor, whereas OTC Prilosec is for common heartburn complaints. Crucially, however, both types of Prilosec are under investigation in the PPI lawsuits. So, if you have developed an illness after taking either OTC Prilosec or prescription Prilosec, you may be eligible for financial compensation through the Prilosec lawsuits.

If you or a loved one were diagnosed with cancer or kidney damaged used Prilosec regularly, you may be entitled to compensation

Prilosec has not been recalled after the legal cases against P&G and AstraZeneca. However, it is not uncommon to see drugs like this recalled due to dangerous defects. In 2020, the FDA issued a recall for Zantac, a different type of antacid drug, after traces of a possible carcinogenic substance, NDMA, was found in the tablets. This also caused a massive lawsuit: you can learn more about the Zantac cancer lawsuits by clicking here. It is possible that Prilosec will be recalled in the near future as further evidence emerges in the PPI lawsuits. These Prilosec drug legal cases are at an early stage, and it might take some time for the full facts to emerge.

It can be difficult to make Prilosec lawsuit payout projections at an early stage in the legal proceedings. However, we can say that any settlement or payout would reflect the severity of injury caused by the product. If, for example, it was proven that P&G and AstraZeneca acted negligently and had prior knowledge of a Prilosec cancer link, the settlement amount paid by these companies would certainly run into tens of millions of dollars. Each claimant would see their compensation based on personal circumstances, i.e., level of injury caused by Prilosec.

Prilosec is not the only PPI drug under investigation. Others, such as Nexium (esomeprazole) and Prevacid (lansoprazole), have been named in the PPI lawsuits 2021. While the drugs have different active ingredients to Prilosec, they work fundamentally in the same manner. Nexium is produced by AstraZeneca and has been available in the United States since 2001, whereas Takeda Pharmaceuticals make Prevacid.

As per the above, it’s difficult to estimate the Prilosec payout amount until we have all the facts and the lawsuits reach a conclusion. The amount P&G and AstraZeneca will payout will depend on the final number of claimants, as well as several other factors that will come to light during the court case.

What is the lawsuit against Prilosec about?

The Prilosec lawsuits allege that the drug’s manufacturers were aware of the risks to long-term users of their product but failed to act. Prilosec has been linked to cancer, kidney failure, bone fractures, stroke and many more serious and life-threatening diseases.

Why was Prilosec taken off the market?

Prilosec has not yet been taken off the market. Other drugs used to treat acid reflux, such as Zantac, have been recalled in the past.

Is there a lawsuit against Prilosec?

Yes. 1000s of claimants have launched personal injury claims against the makers of Prilosec in the last few years. These cases have been consolidated into an MDL, which should help speed up the process in the courts.

Can Prilosec damage your kidneys?

Some studies have shown a Prilosec kidney damage link. This includes major studies that showed people who take Prilosec and other PPI drugs long-term are more likely to suffer chronic kidney damage than those who don’t.

Is Prilosec being recalled?

There has not yet been an FDA Prilosec recall. Other defective antacid drugs have been recalled in the past, so it is possible that we will see a recall of Prilosec in the future.

What are the side effects of long term use of Prilosec?

Most medical professionals believe that short-term use of Prilosec is safe. However, there are many doubts over the long-term use of the PPI drug. Studies have shown links to gastric cancer, kidney problems, bone weakness, stroke and heart failure.