Since it was opened in 1941, Camp Lejeune in Jacksonville, North Carolina, has been one of the most important centers for the US Marine Corps, facilitating training for our armed forces as well as providing a community base for military families. However, it was discovered that for a period of 34 years (1953-1987) the water at the base was contaminated with several dangerous toxins, some of which can cause cancer and lead to death. It meant that for more than three decades, our military personnel and their families were being poisoned by the water at Camp Lejeune. Understandably, veterans and their families want justice. The Camp Lejeune water lawsuit is complicated for a variety of reasons, including the statute of limitations, the immunity afforded to the US Government for military injuries, and even political reasons. Yet, there is a huge fight to get compensation for those who were killed, those who were injured, and those who lost loved ones through exposure to poisoned water.

It is now considered an accepted fact that marine corps personnel and their families drank and bathed in toxic water at Camp Lejeune. Solvents, which were supposed to be disposed of safely, were dumped at sites near the water wells for a period of years. There are three dangerous chemicals that form the basis of the Camp Lejeune toxic water lawsuits - trichloroethylene (TCE), perchloroethylene (PCE), and benzene and in some cases the toxins were found to be at very high levels. One sample of the water, for example, showed that TCE levels were at 1,400 ppb (parts per billion), whereas federal law states that it should be no greater than 5 ppb. So, many veterans, their spouses, and children could have been drinking water containing TCE levels 280 times greater than what is allowed by law. TCE is known to cause several types of cancer. PCE is listed as a reasonably anticipated carcinogen, meaning it is likely to cause cancer in humans. Benzene is a Group 1 carcinogen, meaning it is a definite cause of human cancers.

The fight for justice on behalf of the veterans and families injured by poisoned water at Camp Lejeune has been going on for a long time, with elements of the lawsuits and other compensation claims even reaching the Supreme Court. But there are issues that complicate the case. For instance, there is the question of “sovereign immunity,” barring (in some situations) veterans from suing the Federal Government. There are also issues with the statute of limitations. But all of these are being challenged in the courts. In 2022, perhaps the most important development has been the Camp Lejeune Justice Act, a bill that was introduced in Congress in March 2021. The piece of legislation effectively opens the way for veterans to pursue litigation for injuries sustained by Camp Lejeune toxic drinking water, as well as to provide other provisos to give vets better access to disability claims and other benefits. In terms of the Camp Lejeune water lawsuits 2022, the bill (which still has to be signed into law) has caused specialist Camp Lejeune lawyers to ask veterans and their families to come forward to begin compensation claims.

The Camp Lejeune Justice Act, which established the process by which veterans and their families can seek damages for injuries sustained at Camp Lejeune, was included in the PACT Act. These eligibility requirements are set forth in the statute: 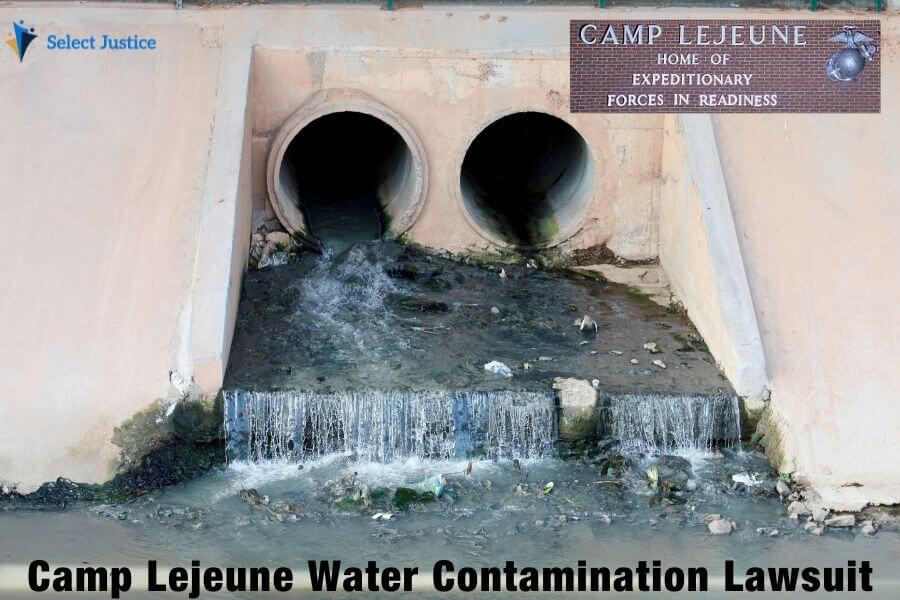 Many serious injuries and illnesses have been linked to the Camp Lejeune TCE/PCE water contamination. These include several types of cancer, Parkinson’s disease, renal toxicity (a serious kidney disease), aplastic anemia (a bone marrow disease), and other myelodysplastic syndromes. Other Camp Lejeune injuries cited by the VA include female infertility, miscarriage, scleroderma (a skin disease), neurobehavioral effects, and hepatic steatosis. As you might expect, many of these diseases have led to the death of veterans who spent time at Camp Lejeune. Some of the possible injuries for which a settlement claim could potentially be paid are described below:

With such a variety of injuries caused by Camp Lejeune toxic water contamination, it is understandable that symptoms will not all be the same for all claiming injuries. However, we can describe some of the symptoms of exposure to TCE and PCE, the two main solvents found in the water at Camp Lejeune. Symptoms of PCE poisoning include CNS depression (dizziness and drowsiness), problems with hand-eye coordination, neurobehavioral changes, vision problems, problems with concentration, fatigue, and headaches. Symptoms of TCE poisoning include memory loss, mood swings, impairment of cognitive function, fatigue, headaches, and problems with motor function. Please note that this is only a small selection of the possible Camp Lejeune toxic water illness symptoms. 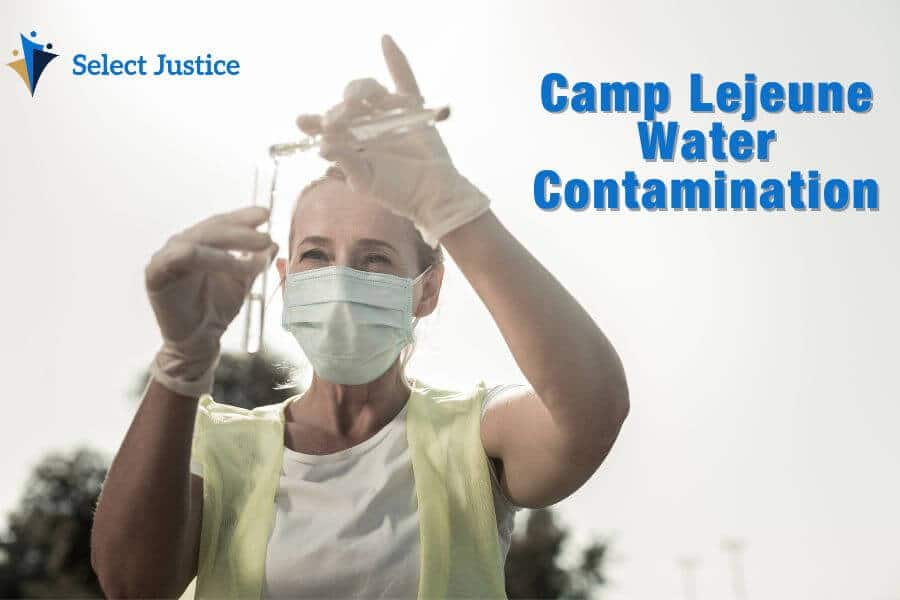 The VA (Dept of Veterans Affairs) has established a list of Camp Lejeune presumptive conditions for veterans who were based at the camp from 1953-1987. A presumptive condition or injury is one where there is little to no legal burden on the claimant to prove that the injury was caused by something other than the cited cause, Camp Lejeune water in this case. For example, if a veteran developed kidney cancer after spending time at Camp Lejeune, it is legally presumed that the contaminated water caused the kidney cancer. Of course, there are certain criteria that the veteran or family member must meet, the main one being that they were based for more than 30 days at Camp Lejeune during the 34-year period when the water was known to be contaminated.

There is a concerted effort from veterans, their families, Camp Lejeune lawyers, and even some politicians to secure financial compensation for those affected by toxic water at the military base. As we previously mentioned, there are many external factors that distinguish the Camp Lejeune compensation lawsuits from traditional lawsuits. But the broad consensus is that a settlement should be secured for those who suffered injuries, chronic illness, and death.

The amount of money paid out in the Camp Lejeune compensation lawsuits will depend on a variety of factors. These include the type of injury or illness caused by toxic water at Camp Lejeune and the impact those injuries had on the veteran’s quality of life. As pointed out earlier, there are other things that will impact Camp Lejeune payouts, not least the passage of the Camp Lejeune Justice Act through the United States Congress. Personal injury claims against the government for military personnel are not like traditional personal injury claims, as the government is afforded certain legal protections. However, there is a broad consensus that, eventually, the door will be open for those injured to seek substantial payouts.

It is worth noting that Camp Lejeune toxic water survivors have been very active in lobbying for justice. Survivor groups, which are made up of veterans, families who have lost loved ones, and other advocates for justice, have pressured the government and military to do more. We should point out that there have been certain measures put in place to give vets some sort of compensation, including payment of medical costs for presumptive injuries. However, critics believe that not enough has been done. That’s one of the reasons for the initiation of Camp Lejeune survivor lawsuits, as those men, women, and children who were injured and died due to toxic water exposure deserve more justice than what has been offered so far by the government.

If the bill passes and is signed into law, people who were exposed to chemicals in the water at Camp Lejeune will have two years to bring lawsuits against the government.

While the contamination at Camp Lejeune is one of the most well-known cases of water contamination, it’s far from the first.

Studies have shown a link between drinking the water at Camp Lejeune during these years and developing serious health conditions later in life.

How do I file a claim for Camp Lejeune water contamination?

The first thing to do is fill out a free evaluation form to see if you qualify to join the toxic water Camp Lejeune lawsuits. After that, you can speak with a personal injury lawyer to initiate your claim.

What are the symptoms of the Camp Lejeune water contamination?

A broad range of serious illnesses and injuries have been linked to toxic water contamination at Camp Lejeune, so the toxic water symptoms will also vary. General speaking, those who have been exposed to toxins like TCE and PCE might develop symptoms like mood swings, fatigue, dizziness, behavioral changes, and motor issues. If you have any concerns, you should contact your doctor right away.

What diseases are associated with Camp Lejeune water contamination?

Several different types of serious diseases have been linked to Camp Lejeune toxic water, including many types of cancer.

What was in the drinking water at Camp Lejeune?

A range of toxic chemicals were found in the water at Camp Lejeune, but most worryingly, there were high levels of trichloroethylene (TCE) and perchloroethylene (PCE) discovered. Both these chemicals are very dangerous when ingested by humans.

What is the Camp Lejeune Justice Act?

The Camp Lejeune Justice Act is a bill that has been passed through the House of Representatives and is awaiting approval by the Senate. If it passes, it should open the way for vets and their families to file lawsuits against the government for Camp Lejeune toxic water exposure. The bill also contains other measures that help those affected get compensation.

Technically speaking, yes, Camp Lejeune water wells are still contaminated. Although, they are no longer used by the military for drinking or bathing. Is

No. It remains one of the most important military training bases in the United States.

What is cognitive and neurobehavioral dysfunction?

Cognitive and neurobehavioral dysfunction covers a broad list of issues linked to problems with the brain. These could range from dementia to difficulties with motor skills.

How long has Camp Lejeune been around?