One of the strongest hurricanes to make landfall in the contiguous United States, Hurricane Ian caused widespread damage in states like Florida and South Carolina. Sadly, it was one of the deadliest hurricanes, too, particularly in Florida, where it cost more lives than any storm since the Labor Day hurricane of 1935. It is, of course, difficult to pin the blame on anyone for what is an act of nature. However, many Americans impacted by Hurricane Ian claim they have been let down by federal assistance programs and insurance companies. This has led to a notable number of Hurricane Ian lawsuits.

In the aftermath of Hurricane Ian, in the fall of 2022, the big question on everyone’s lips was – who will pay for one of the costliest hurricanes of the 21st century? Obviously, the majority of homeowners would have had insurance, but many have complained of being ill-served by those insurance companies, including underpayment of claims, denial of claims, or late payments. One of the major issues that have come to light is that there is often a differentiation made in insurance policies between flood damage and wind (directly from the storm) to properties, with many policies only covering the latter. With the former, there can be assistance from FEMA’s NFIP (National Flood Insurance Program), but homeowners say that NFIP, too, has not been enough. In early December 2022, Florida Governor Ron DeSantis announced an assistance fund of around $60 million to help those not covered by insurance, but critics said that this wasn’t enough to deal with the effects of a storm that had caused tens of billions of dollars of damage. By late 2022, many homeowners claim to have had enough – seeing no other choice but to litigate against the companies that have left them bereft of assistance while trying to rebuild their lives after one of the most destructive hurricanes in recent years.

Hurricane Ian caused widespread damage to Caribbean nations, particularly the Bahamas, and the United States. Florida, South Carolina, Georgia, Alabama, and North Carolina saw the most damage, with Floridians bearing the brunt of the storm damage. Electricity was knocked out for around 2.6 million homes in the Sunshine State, and tens of thousands of homes were flooded and severely damaged; in Lee County alone, around 5,000 homes were judged to be destroyed beyond repair. Financial estimates for Hurricane Ian’s damage varies, but it ranges from anywhere from $20 billion to $100 billion. The best estimates seem to be in the region of $67 billion, but there is also scope for this to increase through litigation – adding an extra $10-$20 billion to the bill.

The level of destruction caused by Hurricane Ian was substantial. It is regarded as the most expensive to ever hit Florida, such was the amount of damage caused. Hurricane damage, which can manifest itself in many ways, often includes some of the these most common types of hurricane damage: 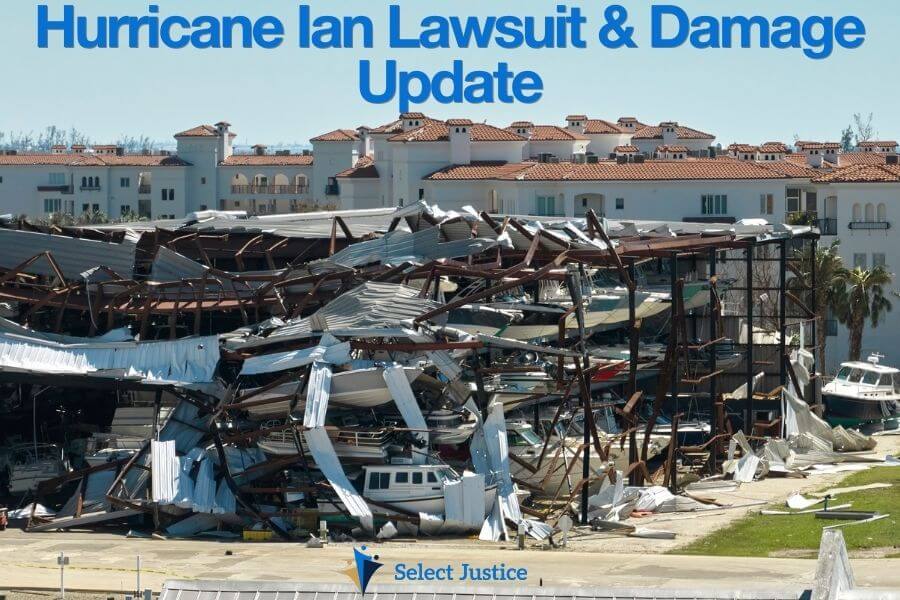 Hurricane Ian’s death toll in the United States was confirmed as reaching over 100 in the weeks after the event, with final estimates saying that 152 Americans had died as a result of the storm. As mentioned, of all the states, Florida was the worst affected. It is believed that 146 Floridians died due to the impact of Hurricane Ian. We should point out that hurricane death tolls are always fluid, and it is possible this number could rise in the future.

One of the main criticisms of the Hurricane Ian response revolved around the actions of insurance companies. As mentioned above, many insurance policies covered storm damage but not flood damage, with the latter often being covered by FEMA. While this might sound simple, it has been framed as an unfair move by those companies. Specifically, campaigners have pointed to the fact that it can be difficult to tell whether damage has been done to a property directly by the storm or by flooding. When there is doubt, the insurance companies have seemingly tried to wriggle out of their obligations. This is one of the fundamental drivers of the Hurricane Ian lawsuits. 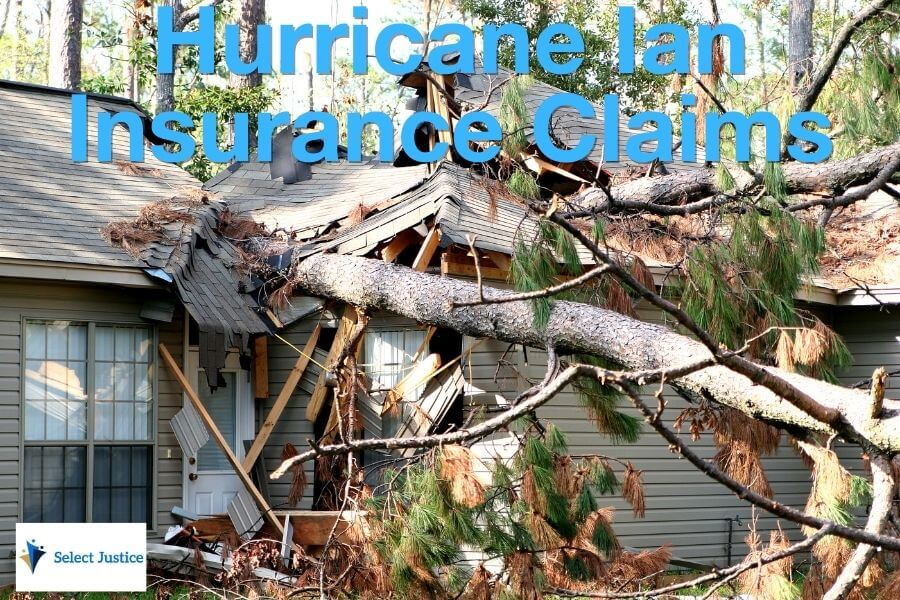 Florida bore the brunt of Hurricane Ian storm damage, and the impact of the storm and its aftermath was predicted to “financially ruin countless” homeowners in the state, particularly those without flood insurance. Indeed, it has been estimated that the bill for the uninsured in Florida could reach $10 billion. For balance, we should point out that the extreme damage and huge insurance payouts (running into billions of dollars) have meant that many insurance companies could go also go bankrupt.

Despite the response from FEMA, insurance companies, and local government, many people who have lost their homes, suffered property damage, injuries, or financial hardship due to Hurricane Ian feel let down by the response. In particular, there is widespread anger at the actions – refusing to pay, delayed payments, underpaying – of some of the insurance companies, leading furious citizens no choice but to pursue legal action. Hurricane insurance relief lawyers can help anyone who feels they have been mistreated by these companies. Often, the threat of legal action can make insurance companies agree to look again at the policy, sometimes reversing their decision not to pay. But if necessary, lawyers have vowed to take the claims to court.

Those impacted by Hurricane Ian can pursue compensation through various means, including FEMA assistance programs, local and federal initiatives, and, of course, through their insurance policies. But many believe this is not enough to help them rebuild their homes and their lives. If you believe you have been under-compensated, you should speak to an experienced attorney to pursue Hurricane Ian compensation through legal routes.

As with all natural disasters in the United States, the Federal Emergency Management Agency (FEMA) was tasked with assisting those impacted by Hurricane Ian. FEMA performed a wide range of roles in its hurricane response, including coordinating the response to the storm with on-the-ground support to aid in disaster recovery efforts. FEMA responders were essential in looking for survivors of Hurricane Ian, thousands of whom were displaced in the aftermath of the storm.

While FEMA is recognized for its boots-on-the-ground activities during disaster relief, it is also important to recognize that the organization also provides financial support. This comes in many forms, but perhaps most notably through its National Flood Insurance Program (NFIP). By mid-October, FEMA confirmed it had received almost 40,000 claims through NFIP, awarding $77 million to policyholders. FEMA also provides programs to help with unemployment assistance, low-income household support, and small-business loans. There is also assistance provided through unique programs like Operation Blue Roof, a federal program designed to help homeowners with rebuilding their damaged properties.

People impacted by Hurricane Ian are able to make claims through FEMA in several ways. For example, NFIP policyholders are able to claim up to $1,000 to reimburse costs for purchases made to combat the storm’s damage, such as sandbags, plastic sheeting, and lumber. FEMA also extended the deadline for policyholders making claims for financial compensation after Hurricane Ian. Details on how you can start a FEMA claim for hurricane flood damage are provided here.

As we enter 2023, many families in Florida, South Carolina, and elsewhere are struggling to rebuild their homes after Hurricane Ian. It should be pointed out that insurance policyholders have two years from the date of a hurricane’s landfall to file insurance claims under the statute of limitations, but many of those who have already filed claims feel cheated. If you are someone who feels you haven’t gotten the attention or support you deserve to recover from Hurricane Ian damage, special hurricane insurance claims lawyers can help you secure the appropriate amount of compensation for hurricane damage.

How to Join Hurricane Ian Lawsuit

It has been widely reported in the media that Hurricane Ian’s total costs in damages and economic losses could reach upwards to $60 billion, which could cost insurance companies tens of billions of dollars in compensation payouts. The upper estimates published are said to be in the region of $40 billion. While it is hoped that insurance companies will always honor their commitments, we know it is also the case that they will try to underpay – or not pay at all – based on the fine print. For many people, this will lead to not getting the expected payout, or worse still, no payout at all. You have rights, however, and we can connect you to our legal partners who can walk you through all the details of your policy, providing impartial information on whether you have received enough compensation. Remember, insurance policies can be deliberately confusing, allowing insurance companies to renege on the claims. If you were impacted by Hurricane Ian and suffered property damage or physical injuries, business losses, or other kind of damage, speak with one of our experienced advisors to see if you can start a claim for Hurricane Ian compensation.

Hurricane Ian was one of the most destructive storms to hit the United States in the 21st century. Months after the storm hit landfall, people are still seeking assistance as they look to recover from the storm’s impact. Some of the important resources you can use are listed below:

When was Hurricane Ian?

Hurricane Ian was formed on September 23rd, 2022. The storm dissipated over the state of Virginia on October 2nd, 2022.

When did Hurricane Ian hit Florida?

Hurricane Ian made landfall on the coast of Florida on September 28th.

How long to file insurance claim after hurricane?

It depends on the insurance policy, but most will have a two-year window to file claims under the statute of limitations. However, if you are unsure, you should contact a legal expert for help.

How do I get paid to help with Hurricane Ian?

There are several ways to get compensation for hurricane damage, including financial assistance for those made unemployed by the storm. However, if you feel you have been underpaid through your insurance company, you should contact a lawyer for help.

How do I apply for FEMA Hurricane Ian?

Details of FEMA’s insurance programs can be found here.

How to get Hurricane Ian disaster relief?

There are numerous ways you can get relief if you have been impacted by the hurricane. Go to the FEMA website for the latest information.

How much money is FEMA giving for Hurricane Ian?

FEMA has given millions of dollars in relief funds for Hurricane Ian, and there has also been money put forward by local government and charities.