Firefighting is among the most dangerous roles in the United States. While the assumption might be that putting out fires is something carried out by traditional firefighters answering a call in an emergency, people working in many other job roles may have to fight fires as well. This includes military personnel, chemical plant workers, and airport personnel. Along with regular firefighters, people in these roles may come into contact with firefighting foam, including AFFFs (aqueous film-forming foams). For example, AFFF is often used to contain and suppress fires caused by jet fuel spillage. No matter the job role, it is possible that those people responsible for fighting fires have been exposed to dangerous chemicals in AFFF, some of which may be carcinogenic (cancer-causing agents). Studies have reported on this link between AFFF and cancer, and this has resulted in the filing of 1000s of lawsuits on behalf of men and women who allege that AFFF manufacturers have, even unwittingly, put them at risk of cancer and death. Remember, many of these people, some of whom could be unpaid volunteers, place their lives on the line every day putting out fires – the least they deserve is the tools and equipment they use to meet the highest standards of safety.

The most notable news about the AFFF lawsuits as of late 2022 is that the litigation proceedings are progressing. In the summer of 2022, some of the roughly 2,700 lawsuits were consolidated into a class-action case. In the early fall, a trial date was listed, and later, a bellwether trial was ordered by a judge. The latter is scheduled for June 2023. Later in the fall, a judge dismissed a proposal from one of the main AFFF manufacturers, 3M, to throw out the case. In late 2022, AFFF firefighting foam lawyers started to negotiate a settlement with AFFF companies, but it has not yet reached a conclusion as of yet. Finally, and perhaps most importantly, the number of claimants joining the lawsuits has swelled, now numbering well over 3,000. Lawyers believe that even more people will come forward to increase those numbers further.

There are many different types of firefighting foam, separated into classes (Class A and Class B), which contain different chemicals and have different purposes. AFFF is a Class B foam, most commonly used to suppress fires where flammable liquids – oil, gasoline, jet fuel – are present. AFFF is manufactured by several companies: 3M, Tyco, and DuPont. AFFFs can contain PFAS (per- and polyfluoroalkyl substances), PFOA (perfluorooctanoic acid), and PFOS (perfluorooctane sulfonate) chemicals, which have been linked to several types of injury, including cancer. These chemicals are complex, and their impact on human health is not fully understood, although the cancer link has been reported in several major studies. 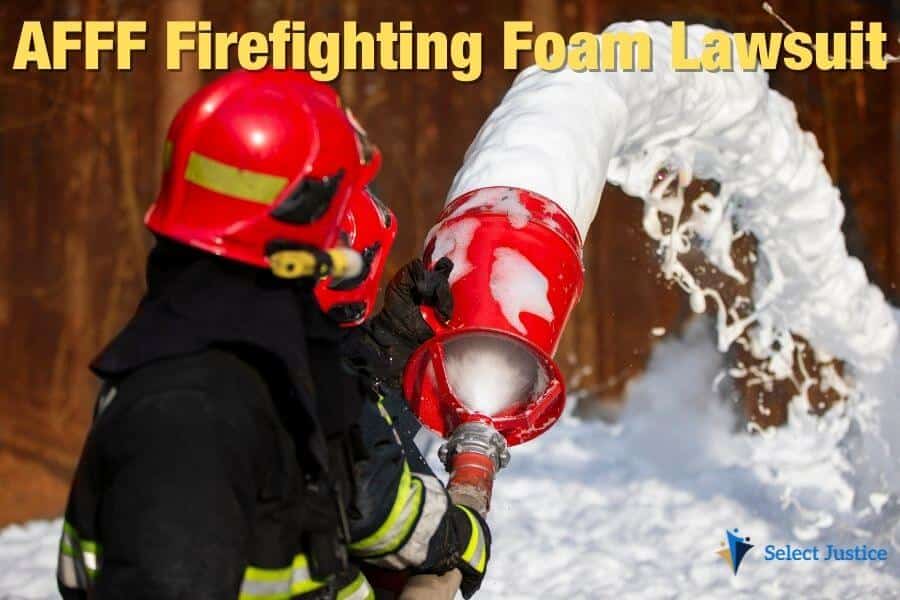 Firefighting Foam and Link To Cancer

As previously mentioned, the AFFF firefighting foam is used by workers in a variety of different occupations. However, the cancer link relates to chemicals like PFAS and PFOA, and affects people regardless of their job title – not just firefighters. Since these chemicals are found in many industrial products, it’s important to clarify that the cancer risks – and studies on those risks – have covered different circumstances, including, for example, the communities that have had PFAS contamination in their water supply.

We know that PFAS can cause several types of illness, including a link to hypertension in women, but the most worrying aspect of the studies is the PFAS (PFOA, PFOS) cancer link. Many types of cancer have been associated with these PFAS chemicals. They include:

Aside from the link with cancer, AFFF and the chemicals – PFAS, PFOAS, PFOS – contained within it have been linked to a range of other health issues. Indeed, we should remember that many people and community organizations are suing AFFF producers for water contamination in their area. Other health problems linked to AFFF aside from an increased likelihood of developing of the cancers listed above include immune system issues, hormonal balance problems, non-cancerous liver damage, elevated cholesterol, fertility and pregnancy problems (including preeclampsia and hypertension), child & fetal development issues, thyroid problems, and asthma. 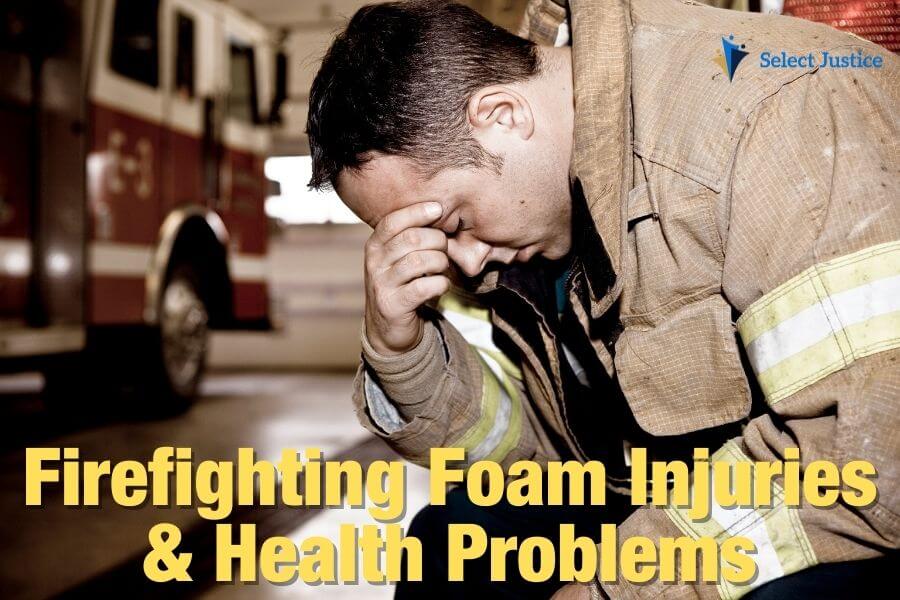 AFFF exposure problems are not limited to emergency service/municipal firefighters only. Indeed, looking at the claimants in the AFFF cancer lawsuits, the majority seem to come from the United States Armed Forces. For instance, there were lawsuits filed by Navy Personnel, including a former Navy firefighter who developed testicular cancer and another who developed kidney cancer.

For the last several years, The United States Air Force has been under scrutiny for its use of AFFF firefighting foam, with a wide-ranging debate occurring over the safety issues surrounding the product. The Air Force has implemented measures to change its AFFF, replacing it, in some cases, with AFFF containing a lower concentration of PFAS. Nonetheless, Air Force personnel have joined the AFFF lawsuits, claiming exposure has caused different illnesses and injuries, including cancers.

Right now, AFFF lawsuit law firms are taking on cases for those who may have been injured by PFAS exposure in firefighting foam. The defendants in the fire foam cancer lawsuits are the manufacturers of the AFFF products, not the US armed forces or government. If you have suffered an injury due to AFFF exposure, you might be eligible to join the current firefighting foam lawsuits. AFFF exposure attorneys in all 50 states are accepting new clients, and most believe there is a strong chance of securing significant compensation for those affected by the potentially life-threatening product.

Is AFFF Foam a Class Action Lawsuit or a Mass Tort Lawsuit?

Technically speaking, the AFFF Foam lawsuits are – or at least will be – considered a mass tort lawsuit. Mass tort lawsuits, which are often classified as MDLs (multidistrict litigations), are usually reserved for lawsuits where the claimants have broadly similar grievances against the defendant or group of defendants; in this instance, 3M, DuPont et al. A class action lawsuit usually comes when the grievances are (almost identical). Both these types of lawsuits are used to expedite the process through the courts, allowing information to be shared, establishing norms and rulings, etc. Importantly, compensation is usually shared equally in a class action, whereas payouts depend on individual circumstances in an MDL. While it might sound somewhat complicated, we should point out that some of the AFFF lawsuits have been consolidated into a class action. This is normal, as, for example, community groups might litigate against AFFF companies for a contaminated water supply. But the majority of AFFF cancer cases are likely to be resolved within mass tort law, meaning claimants would expect to receive compensation based on an individual basis, i.e., how they were personally impacted by AFFF exposure.

If you have been impacted by firefighting foam exposure, you could be in line for compensation. Right now, we do not know how the AFFF lawsuits will play out, but there is a chance that the companies who manufacture the firefighting foam will be forced to award claimants a payout, or they might decide to settle out of court. If the latter, the AFFF settlement could be very large. However, much depends on the number of claimants, whether it’s clear that cancers and other injuries were caused by AFFF chemicals, and if it’s clear the companies involved were at fault. However, Bloomberg Law reported this year that the total amount of compensation that AFFF companies might be forced to pay could run into billions of dollars.

What types of cancer is caused by AFFF?

Certain chemicals – PFAS, PFOA, PFOS – contained within some types of AFFF have been linked to causing cancer. These include breast, colon, liver, and kidney cancer.

What are the side effects of AFFF?

Many different AFFF side effects have been reported, including issues like asthma, child and fetal development problems, and cholesterol issues. However, the most worrying side effect is linked to the components – PFAS, PFOA, PFOS – found in some AFFF foams. These chemicals may cause a range of cancers in humans.

Is AFFF a carcinogen?

AFFF itself is not a carcinogen (cancer-causing substance), but some of the compounds found in it, such as PFAs, are classed as probable human carcinogens. This means they are likely to cause cancer in humans, particularly if exposed to large amounts or over long periods of time.

What is firefighting foam made of?

There are several types of firefighting foam. The current firefighting foam lawsuits focus on AFFF, Aqueous Film-Forming Foam. These are usually made using a combination of hydrocarbon and fluorosurfactant agents. It is the latter that can contain the PFAS and other possible carcinogenic chemicals.

What chemicals are in fire fighting foam?

There are many chemicals in firefighting foam, and it should be remembered that it is manufactured by different companies, each with its own variation of AFFF. The main concern of the AFFF lawsuits is the level of PFAS (PFOAS, PFOS) in firefighting foam. These have been linked to cancer.

PFAS (Per- and polyfluoroalkyl substances) are human-made chemicals found in a wide variety of products. They have been in use since the 1940s, and they have both commercial and industrial use. You will find PFAS in everything from paint to carpets to firefighting foam.

Generally, hand-held fire-extinguisher foams are non-toxic. However, the foam can irritate users or others nearby when exposed to the skin or eyes.