Nexium is a common drug sold in the United States to treat problems like acid reflux and minor ulcers. Marketed and manufactured by AstraZeneca, which has sold Nexium in the US since 2001, Nexium is available as an OTC (over the counter) drug or can be prescribed by a doctor. Millions of Americans use Nexium (one figure shows that five million Nexium prescriptions were written in 2019 alone), but there is now huge concern that Nexium use may do long-term damage to the kidneys, as well as cause other life-threatening diseases like pancreatic cancer. Claimants in the Nexium lawsuit allege that the manufacturer of the drug, AstraZeneca, was aware of some of these serious health risks but continued to sell and market the drug for profit.

Nexium is the brand name for esomeprazole magnesium, a class of drug that falls under the category of PPIs (proton-pump inhibitors). As such, Nexium is similar to Prilosec (omeprazole), which is also a PPI, although there is a slight difference in the composition. As with Nexium, there are Prilosec lawsuits alleging that the drug’s manufacturers (Proctor & Gamble and AstraZeneca) knew they were very dangerous to people taking them. Nexium can be bought over the counter as Nexium 24HR or as a prescription drug. The main difference between the two types of Nexium is the dosage size, with the OTC counter coming in 20mg dosage, making it slightly weaker than the prescription variety. The FDA lists four main conditions that Nexium is used for: 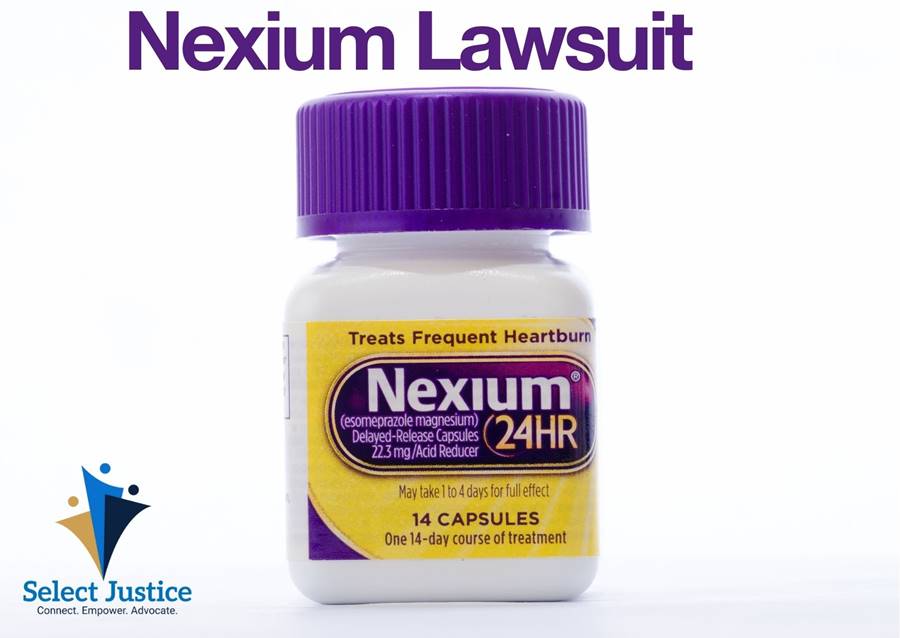 If you or a loved one were diagnosed with cancer or kidney damaged used Nexium regularly, you may be entitled to compensation 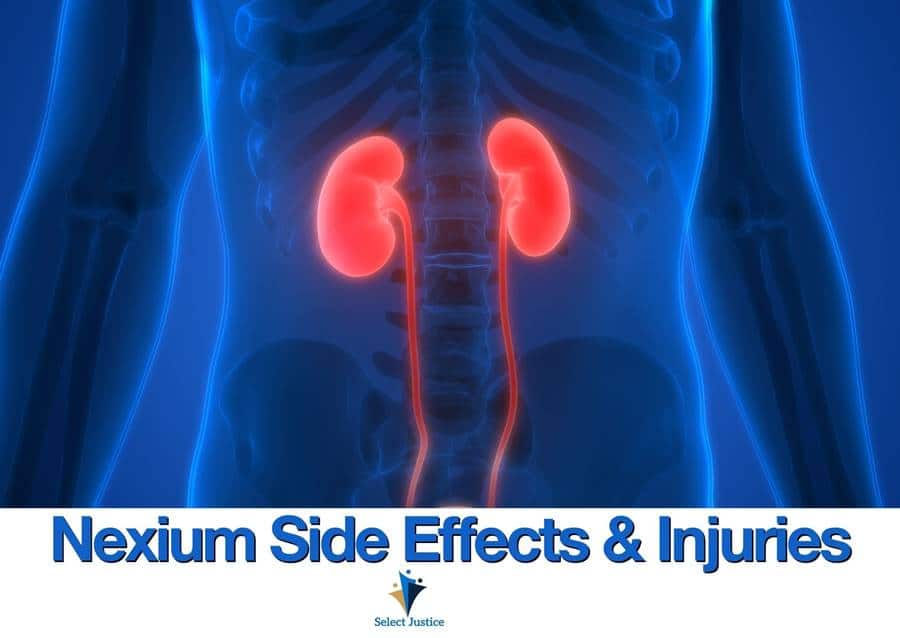 There can be many side effects of esomeprazole (Nexium) use, dozens of which are listed by the Mayo Clinic. These include, but are not limited to, bloating, constipation, chills, cough, dizziness & drowsiness, heart palpitations, high blood pressure, fever, nausea, indigestion, rash, and seizures. If you believe you are experiencing side effects from taking Nexium, you should contact your doctor for more advice.

While most drugs can have side effects, those participating in the lawsuits against Nexium manufacturers allege that long-term use of this PPI drug has caused serious side effects, including chronic kidney disease, gastric and pancreatic cancer, osteoporosis, as well as other debilitating and life-threatening diseases.

Several studies have demonstrated that those who take Nexium (or other PPI drugs) over long periods are more likely to present with chronic kidney damage later in life. One study by the Washington University School of Medicine, which looked at over 125,000 patients, concluded that the use of PPI drugs increased the risk of chronic kidney damage. The study’s senior author said: “Our results indicate kidney problems can develop silently and gradually over time, eroding kidney function and leading to long-term kidney damage or even renal failure. Patients should be cautioned to tell their doctors if they’re taking PPIs and only use the drugs when necessary.”

As 15 million Americans regularly suffer from ailments like acid reflux, the question begs how many people are developing kidney damage after long-term use of Nexium? Moreover, the central premise of the Nexium kidney disease lawsuit is why did AstraZeneca not warn patients and doctors about the risks?

Some lawsuits filed against makers of PPI drugs allege that the use of products like Nexium can lead to stomach (gastric) cancers. For example, on February 1st, 2021, the family of Lisa Marie DeSouza filed a wrongful death lawsuit against AstraZeneca and Merck in the US District Court for the District of New Jersey. The family claims that DeSouza took Nexium from 2009-2019 before developing gastric cancer, which caused her death. The Nexium cancer link is based on the premise that “emerging evidence from multiple observational studies suggests long-term use of PPIs is associated with a higher risk of gastric cancer development.” Again, claimants in the PPI cancer lawsuits are demanding answers from Nexium producer AstraZeneca. Why is the drug aggressively marketed to patients and healthcare professionals without warnings over cancer risks?

Gastric cancer is not the only type of cancer linked to Nexium and other PPI drugs. Studies have queried whether there is a link between PPI antacids and pancreatic cancer. A major study conducted in South Korea concluded that “exposure to PPI appears to increase the risk of pancreatic cancer, independent of conventional risk factors.”  These cancer risk studies are freely available, and companies like AstraZeneca will be well aware of their conclusions. Nexium cancer lawyers are demanding that AstraZeneca, as well as other PPI manufacturers, be held accountable for failure to warn of the PPI cancer risk.

If you or a loved one were diagnosed with cancer or kidney damaged used Nexium regularly, you may be entitled to compensation

Other studies have suggested a link between PPI drugs like Nexium and osteoporosis. The studies have taken a deep look at whether long-term acid suppression (Nexium works by blocking the body’s ability to make stomach acid) causes issues with the absorption of vitamins and minerals. If the bones aren’t getting the right nutrients to support health, such as calcium, debilitating medical outcomes like osteoporosis can occur. Osteoporosis is a condition characterized by weak bones, making them more brittle and more likely to fracture. While not all studies have been conclusive, there is nevertheless a duty for AstraZeneca and other PPI makers to warn about potential risks. If you or a loved one has suffered bone damage after taking Nexium, you should contact a PPI bone damage law firm to see if you qualify for a claim.

As the lawsuit is at an early stage, it can be difficult to estimate the Nexium lawsuit settlement amounts for claimants. However, personal injury payouts are proportional to the damage caused by the products. So, if it is proven that Nexium causes cancer, kidney damage, or osteoporosis, then you can expect AstraZeneca to be forced to pay out significant sums of money. Moreover, these Nexium settlements and payouts would theoretically be much higher if it can be proven that the manufacturers knew of the risks and willfully ignored them, causing injury and, in some cases, death, among many Americans. Big Pharma companies, including AstraZeneca, have been forced to pay out hundreds of millions of dollars in past defective drug cases.

As of late 2021, there has not been a recall of Nexium or similar PPI drugs. It is not uncommon for the FDA to issue a recall of defective heartburn drugs, as it did with Zantac after finding an antacid cancer risk in 2020. Zantac (ranitidine) is also a common drug used for heartburn and acid reflux, although it is not classed as a PPI. If you have taken Zantac and developed cancer, you can find more information on the 2021 Zantac cancer lawsuits here.

Is Nexium a Class Action Lawsuit or a Mass Tort Lawsuit?

The Nexium case is not a class-action lawsuit. It is part of an MDL (multidistrict litigation). A class-action lawsuit is a single lawsuit filed on behalf of a (often large) group of individuals with the same grievance. An MDL (mass torts are usually filed as MDLs) is a consolidation of different lawsuits for purposes of efficiency. In a class-action lawsuit, the settlement or payout is shared equally among claimants. In an MDL, each claim is judged independently. So, depending on the injury caused by Nexium, the payout for claimants would differ.

It is worth noting that the lawsuits taken against AstraZeneca are associated with other lawsuits involving other companies. For instance, AstraZeneca also produces the prescription version of Prilosec, whereas the over-the-counter product is made by Proctor & Gamble. Other companies facing lawsuits include Takeda Pharmaceuticals, which makes Prevacid. As these are common drugs that are widely available OTC, it’s not a stretch to say many claimants would have used different products. The point is that the Prilosec lawsuit payouts will be linked to the Nexium payouts, and vice versa. The cases aren’t singling out AstraZeneca but several manufacturers of potentially dangerous PPI drugs.

As with all lawsuits at an early stage, it’s not clear what the outcome of the Nexium lawsuit will be. The bellwether trial (expected in 2022) should give us some indication of the direction of the PPI lawsuits. However, it will cost you nothing to get in touch with an expert personal injury lawyer to evaluate your case against AstraZeneca or other PPI drug manufacturers. You can start your claim by filling out a free evaluation form and connecting with Nexium lawsuit attorneys already working on the case.

What is the lawsuit against Nexium about?

Lawyers in the Nexium case allege that the manufacturers (AstraZeneca) knew of links to cancer, kidney disease, osteoporosis, and other diseases, yet failed to warn patients and doctors of the risks.

Why was Nexium taken off the market?

There has not been an FDA recall of Nexium yet. However, other antacid drugs like Zantac have been recalled in the past due to links with cancer.

Is Nexium banned in the US?

Nexium has not yet been banned in the United States. If the outcome of the Nexium lawsuits proves PPI drugs cause cancer and other diseases, it is possible Nexium will be banned in the future.

Does Nexium cause high blood pressure?

The active ingredient in Nexium is esomeprazole magnesium, which can increase the levels of tacrolimus in your body. This can lead to high blood pressure.

Was there a recall on Nexium?

There has not been a 2021 Nexium recall, although it is possible that it will be recalled by the FDA in the future, especially if Nexium lawsuits confirm its dangers.

What’s the difference between Prilosec and Nexium?

Prilosec (omeprazole) and Nexium (esomeprazole) are both proton-pump inhibitors (PPIs), which are used to treat acid reflux and similar problems. The main difference between Prilosec and Nexium is that Prilosec contains two isomers of omeprazole, and Nexium contains just one. The two drugs are very similar, however, and it’s for that reason there is a Prilosec lawsuit and Nexium lawsuit, both of which are heading to the courts.

Which PPI was taken off the market?

No major PPI drug has been taken off the market in the United States as of late 2021. However, Zantac (ranitidine) was recalled back in 2020 due to a link with cancer. Zantac is not a PPI, but it is used to treat similar conditions by those who take Nexium.