Johnson & Johnson has voluntarily recalled all lots of five types of Neutrogena and Aveeno aerosol sunscreens, according to the U.S. Food and Drug Administration. Testing has shown that benzene, a carcinogen, is present in some of the company’s sunscreen products.

The company has yet to determine the cause of the issue, as benzene is not an ingredient in sunscreen products. Johnson & Johnson has yet to release the levels of benzene that were present in the products. The company also did not specify how many products were affected.

If you believe you have been harmed by using Johnson & Johnson's sunscreen Select Justice can help you fight for your rights and compensation.

The Johnson & Johnson sunscreen lawsuit developed within the following timeline: 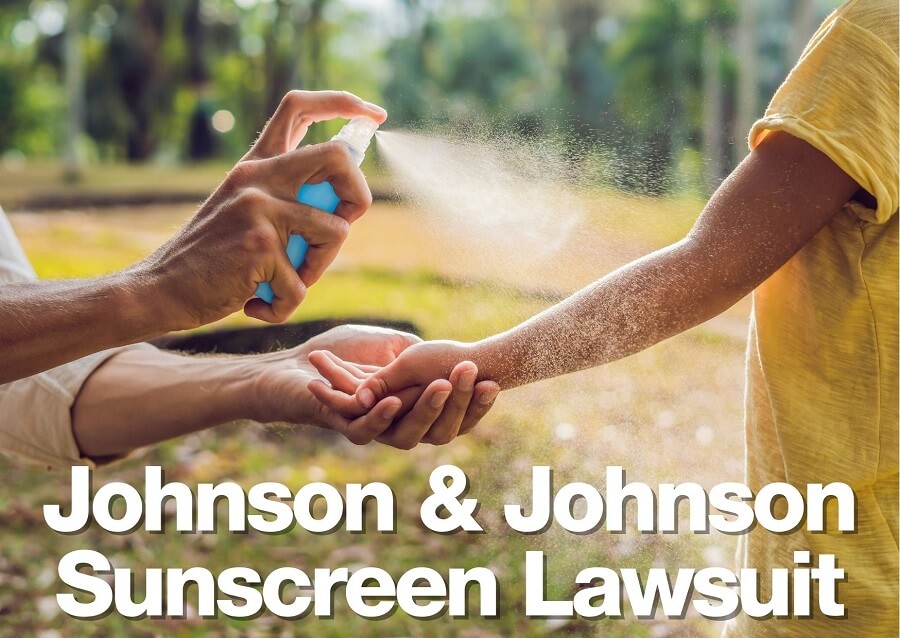 What is benzene and why is it dangerous?

Benzene is a substance that can cause cancer in humans. It has a sweet odor and can be either light yellow or colorless. Benzene’s vapor is heavier than air and can settle in low areas. It evaporates quickly. The substance is less dense than water and will float on top of water and many water-based substances.

Benzene is produced in nature (as a result of volcanoes, forest fires, and other natural processes), and can be produced as a result of human activity. Many industries use benzene to create other chemicals used in the development and manufacturing of plastics, resins, rubbers, drugs, detergents, and more.

There are many ways that people can be exposed to benzene. Cigarette smoke commonly results in benzene exposure, as does working in a factory that uses benzene to manufacture products.

Benzene stops cells from functioning properly. Research shows that benzene can cause the loss of both red and white blood cells. When the concentration of blood cells in the body changes, many problems can occur, including anemia, immune system issues, and leukemia. The way that benzene affects the body depends on many factors, including the length and amount of exposure.

Some effects of benzene take time to appear, while other effects show up soon after exposure.

Immediate signs and symptoms of benzene exposure may include:

Signs and symptoms of benzene exposure that may occur over time include:

The amount of exposure and the length of exposure both affect the degree to which a consumer will experience benzene consumption side effects. Side effects from inhaling benzene after spraying aerosol sunscreen are likely to be more severe than effects caused by the sunscreen’s contact with the skin. Some side effects may become apparent right away, while others may take time to develop.

Possible immediate side effects of using Johnson & Johnson aerosol sunscreen containing benzene include headaches, confusion, a loss of consciousness, and dizziness. If a child would eat the sunscreen rather than inhaling it, possible immediate side effects include irregular heartbeat, digestive problems, and vomiting. Over time, benzene exposure can lead to an increased risk for leukemia.

Many people may have unknowingly been exposed to benzene as a result of using Johnson & Johnson aerosol sunscreen products, including many in the Neutrogena product line. According to Johnson & Johnson, benzene was detected in samples of these products. The company has yet to release how much benzene was in the products or how many products were affected. Benzene is not an ingredient in sunscreen, and the company has yet to determine how benzene contaminated the affected varieties of sunscreen. 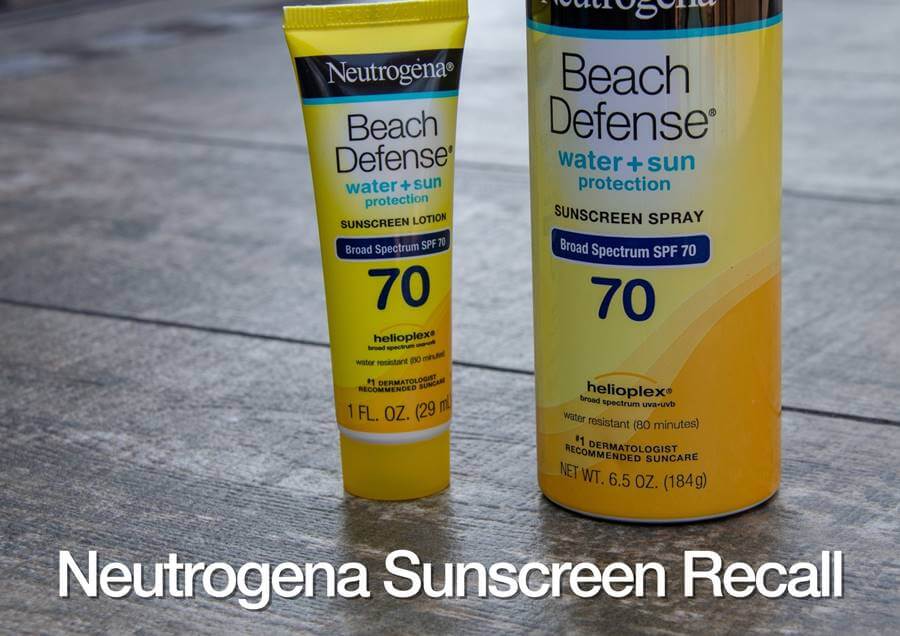 In addition to the recall of several varieties of Neutrogena aerosol sunscreen, the Aveeno skincare line was affected by the Johnson & Johnson sunscreen recall as well. Aveeno Protect + Refresh aerosol sunscreen was also recalled, as benzene was detected in samples of the product through testing run by an independent lab. As with the Neutrogena sunscreens, Aveeno Protect + Refresh is an aerosol formula. Consumers using this formula will inevitably inhale some of the product when spraying it on the skin, increasing the risk of adverse effects due to benzene exposure.

What are the symptoms of leukemia?

If you or a loved one have been exposed to benzene or another carcinogen related to leukemia, it’s important to know the signs and symptoms of the disease. If you believe that you may be dealing with leukemia or another cancer, you must see your healthcare provider immediately.

Some types of leukemia are most common in adults, while others occur more commonly in children. The disease attacks the parts of the body that form blood, including the lymphatic system and bone marrow. Leukemia affects the way your body produces white blood cells. In a person who does not have leukemia, white blood cells work to fight off infection. In a person with leukemia, too many white blood cells are produced, and they don’t function in a way that helps the body.

Signs and symptoms of leukemia may include:

If you or a loved one have used Aveeno or Neutrogena aerosol sunscreen and are experiencing the above symptoms, it’s important that you talk to a doctor immediately. Leukemia is treatable, and early detection can help improve treatment success.

Is Aveeno & Neutrogena a Class Action Lawsuit or a Mass Tort Lawsuit?

Both class action and mass tort lawsuits allow people who have been harmed by the actions of a company to receive compensation. In a class action lawsuit, all defendants are treated equally and receive an identical payout. In a mass tort lawsuit, each individual circumstance is considered, allowing for various payouts depending on the severity of the plaintiff’s complaint.

Initially, class action lawsuits were filed against Johnson & Johnson, the parent company of Aveeno and Neutrogena. As of October 2021, the lawsuits against Johnson & Johnson have been combined into a multi-district litigation, or MDL. An MDL case allows a judge to combine pretrial proceedings for the sake of time and convenience, before potentially separately evaluating each case brought forth by consumers seeking compensation for their injuries.

The exact amount of the settlement that consumers who suffered adverse effects after using Johnson & Johnson aerosol sunscreen will depend on court proceedings.

If you believe that you have a case against Johnson & Johnson, you should start working with a qualified legal professional as soon as possible to prepare for the months ahead.

If you believe you have been harmed by using Johnson & Johnson's sunscreen Select Justice can help you fight for your rights and compensation.

Which sunscreens have been recalled?

Several aerosol sunscreens have been recalled, including:

Can benzene cause cancer?

Yes, research shows that benzene is linked to cancer, specifically, leukemia. Ingesting benzene (such as through the use of aerosol sprays) is one of the most dangerous types of exposure to the chemical.

How much benzene is harmful in sunscreen?

According to Dr. Christopher Bunick, MD, Ph.D., Associate Professor of Dermatology at Yale University, just 0.1 parts per million would be considered a high level of benzene exposure in sunscreen. Dr. Bunick also states that there is no such thing as a safe level of benzene in a sunscreen product.

Which sunscreens are cancerous?

Should I stop using Neutrogena sunscreen?

If your Neutrogena sunscreen is in an aerosol can, stop using it immediately and switch to a new brand of sunscreen.

Aerosol Aveeno sunscreen is not safe for use due to possible benzene contamination.

Is there a class action lawsuit against Neutrogena?

Class action lawsuits were filed against Johnson & Johnson, Neutrogena’s parent company, for benzene contamination in aerosol sunscreen products. The class action lawsuit will now be combined into a multi-district litigation.

Does Aveeno baby sunscreen have benzene in it?

No. Only aerosol sunscreen products tested positive for benzene contamination.