Companies that create products for our babies and young children always strive to cultivate an image that suggests experience and care. Those companies want us to know our loved ones are in safe hands. Neocate, a brand of infant formula developed by Nutricia, certainly projects that image, and it can back up those claims by pointing to over 120 years of experience in making baby formula products. But that carefully crafted reputation took a nosedive recently when an independent study linked Neocate products with serious bone injuries in children. Families with children injured by these products are being urged to join a Neocate formula lawsuit to pursue monetary compensation.

If you believe that your child was harmed by Neocate products, we can help you fight for your rights and compensation.

Neocate, which is manufactured by Nutricia (itself a subsidiary of the huge multinational corporation Danone S.A), is a specialist range of baby formulas aimed at babies and toddlers. Neocate markets itself as the “#1 Worldwide Brand of Amino Acid-Based Nutrition”. The range of formulas – sometimes referred to as elemental formulas – is targeted at infants who are allergic to other types of infant nutrition, including milk-based and soy-based allergies. After the 2017 study linked Neocate to health disorders in infants, experts urged families to monitor children who had been feeding on amino acid-based nutritional products. 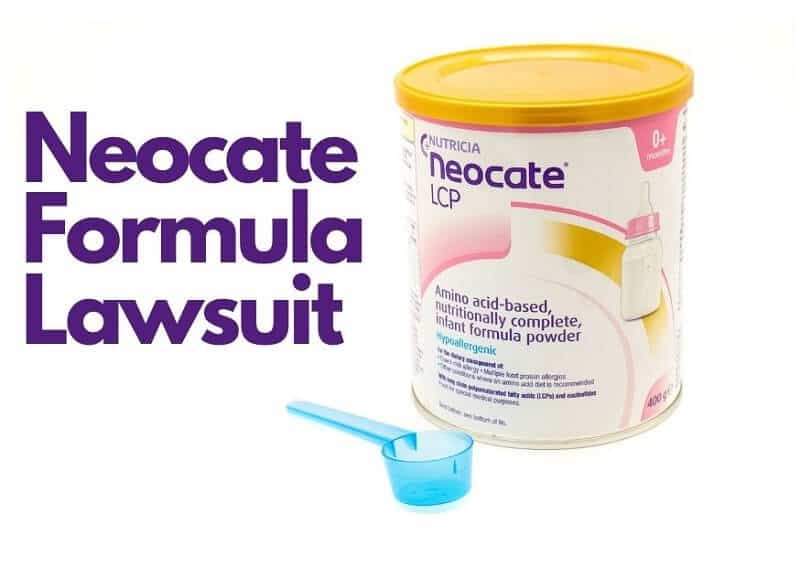 Studies have shown that early-life nutrition is crucial for the well-being of infants, but they have also demonstrated that what we consume in our early years can impact us as adults. As such, a multi-billion-dollar global industry has grown up around infant nutrition. There are 100s of different products available in the United States today, including several specialist infant formulas sold under the Neocate brand. While many of us take it for granted that baby formula is tried, tested and trusted, questions have been raised about Neocate’s impact on our children’s health. A 2017 study, in particular, linked Neocate to a range of bone diseases. While it is early days in terms of what we know, there is gathering momentum behind baby formula lawsuits across the United States.

The Nutricia lawsuits were triggered by a 2017 study involving scientists from Yale University and the Mayo Clinic and published by BONE journal. They found that 94% of 51 infants diagnosed with a disease called hypophosphatemia had been feeding on Neocate products only. The infants had also been diagnosed with bone disorders like fractures and rickets. Moreover, those infants who switched to a different brand of formula showed demonstrable improvement in their conditions. As Neocate is a relatively popular product, families are being urged to check on their children who have been fed Neocate and, if necessary, contact a Neocate injury lawyer to pursue compensation.

The study from Yale and the Mayo Clinic, which was published by BONE journal, is not the only one that links Neocate to infant health issues. Another appeared in the UK-based Bone Abstracts journal, finding “seven cases of exclusively Neocate-fed babies who developed hypophosphataemic rickets.”  The most worrying disorders linked to Neocate relate to the child’s bones, which are caused by an imbalance of the phosphate levels in the body.

The most high-profile case linked to Neocate involved the then-10-year-old Robbie Elam. Robbie has cerebral palsy and uses a feeding tube and wheelchair. In December 2017, Robbie was found to have unexplained bone fractures by doctors. His father, Bill Elam, who cares for Robbie full-time, was investigated for suspected child abuse by Mississippi Child Protection Services. Fractures continued to appear on Robbie’s bones throughout early 2018 while his father was being investigated. Eventually, Bill Elam contacted a personal injury lawyer, who was able to provide Elam and authorities with information on the BONE study linking Neocate – Robbie Elam’s only source of nutrition at the time – to bone fractures. The charges on Bill Elam were dropped, and Robbie was weaned off Neocate. The full details of this story appeared in the Mississippi Clarion Ledger in 2018.

Some of the health issues related to Neocate are discussed below: Neocate is not an individual product. It is a brand covering a range of elemental formulas for different age groups, ranging from new-borns to toddlers. These formulas are amino acid-based and specifically designed for infants who have allergies to standard formulas. There hasn’t been a specific Neocate elemental formula cited as particularly problematic for bone disorders. Rather, the studies have suggested a general issue with Neocate’s elemental formulas. Popular types of these formulas manufactured by Neocate include:

Some studies have suggested that consumption of Neocate can have serious side effects for infants. In particular, the BONE journal study of 2017 linked cases of rickets, broken fractures, and hypophosphatemia to the consumption of Neocate. These disorders were linked to a lowering of phosphate levels after feeding with Neocate. In the simplest terms: Neocate, it is alleged, was not supplying the infants with the nutrition it claimed it provided.

If you believe that your child was harmed by Neocate products, we can help you fight for your rights and compensation.

To date, the only voluntary formula recall from Neocate was in 2009. This was for a limited amount of Neocate cans (3,700), which were deemed to have low protein levels. It was not linked to the Neocate child bone injury lawsuit. There have been no recent recalls of Neocate Jr or any Neocate formula recall 2021 so far. Does the lack of Neocate infant formula recall mean the infant formula is safe? Not necessarily, and we won’t know for sure until more evidence appears with the conclusion of the Neocate lawsuits. We should also point out that Neocate changed its formula in 2018. A spokesperson at the time said the company would “integrate a more highly-soluble phosphate into our Neocate line of formulas.”.

Is Neocate a Class Action Lawsuit or a Mass Tort Lawsuit?

The Neocate injury lawsuit is at a relatively early stage. No cases have gone to court yet, and law firms are still gathering the facts and information on the Neocate case. At the moment, cases are being filed by individuals, but it is possible they will be combined into a mass tort lawsuit at a later point, particularly, if as expected, more families come forward to file lawsuits against Neocate’s producers, Nutricia. It is unlikely that the Neocate infant injury cases will become a class-action lawsuit.

Normally, a class action is filed when claimants have an identical grievance against the defendant. Any financial compensation won in court would be shared equally among the plaintiffs. Because the injuries potentially caused by Neocate will differ in severity, each case will likely be judged separately, and different levels of compensation would be paid. However, a mass tort case would link the cases together, ensuring that the process is more efficient than seeing every Neocate lawsuit as an individual court case.

Neocate is primarily used by infants (from birth to 1,000 days) who have feeding intolerances. Normally, that means the infant is intolerant to milk, soy-based formula products or if the child has multiple food protein allergies (MFPA). Neocate is an amino acid-based hypoallergenic formula.

What is the Neocate Formula lawsuit?

“Neocate Formula lawsuit” is a broad term for a number of individual cases that have been filed against Neocate’s manufacturer, Nutricia, by families who allege the formula has caused injury to their children. The lawsuits are at an early stage, and there is still time to join the Nutricia lawsuits for any families who believe they have been affected by Neocate products.

What are the side effects of Neocate Formula?

Studies have demonstrated a link between Neocate products, i.e., elemental formula and bone disorders. These can include hypophosphatemia, rickets, and bone fractures, all of which are linked to the lowering of phosphate levels in the infant’s body. Low phosphate levels can also cause delayed growth, spinal issues, lethargy, and skeletal deformities.

Does Neocate cause rickets?

While it has not yet been proven unequivocally that Neocate formula directly leads to rickets, some studies have concluded that Neocate can lead to low phosphate levels in infants, which, in turn, can cause (hypophosphatemic) rickets and other bone disorders.

There is no FDA approval for Neocate, as it and other baby formulas are on the FDA’s exempt list. However, all infant formulas sold in the United States must meet certain federal standards for nutrition.

Do we qualify to for a Neocate case?

If your child has been fed with Neocate in the past and is showing Neocate side effects, then you could be eligible for compensation. Use our free evaluation form to get started, and we will connect you with an experienced child injury lawyer to consult you on the Neocate formula lawsuit.

Neocate is made by Nutricia, a company with a history stretching back to the late 19th century. However, Nutricia was bought over by Danone S.A in 2007. Both Danone and Nutricia could be liable to pay compensation in forthcoming Neocate lawsuits.

Where can you buy Neocate formula?

Neocate's website sells the baby formula and also have a store locator around the United States. But you should know that recent studies have shown a link between Neocate products and bone fractures and disorders.