Port A Caths are a common medical implant device used to access veins. The device (port) is placed under the skin, and it is connected to the vein via a catheter. This allows doctors and healthcare professionals to easily administer medicines and transfusions to the patient, and it is often seen as a more expedient and comfortable way to administer these treatments. Port A Caths – also known as ports, IV ports, and TIVADs – are simple devices, but do they pose a risk to patients? We are now seeing a large number of Port A Cath lawsuits, with lawyers representing people who claim their port devices are defective. In fact, there have been claims of Port A Cath injuries and, in some extreme cases, Port A Cath-related deaths.

What Is Port A Cath?

In medical terminology, a port is a small device that is placed under the skin. It is usually then connected to a catheter (a type of tube) that delivers medicine to the veins or other parts of the body requiring medication. From “port” and “catheter”, we get “Port A Cath”, which is actually a brand name for a type of TIVAD (Totally Implantable Venous Access Devices). While there are other names for Port A Cath, the brand name is often used. Thus we might see it spelled as port-a-cath or portacath, or sometimes shortened to port. Regardless of the nomenclature, Port A Caths/TIVADs are devices that are frequently used in medicine, particularly in cancer patients or those who often need blood transfusions, as they are allow healthcare professionals to easily administer intravenous medicines to those who require regular treatments. However, as it transpires, some of these devices may be defective, and they might be causing injury and complications to patients who have them fitted. This is the fundamental basis of the 2022 Port A Cath lawsuits. 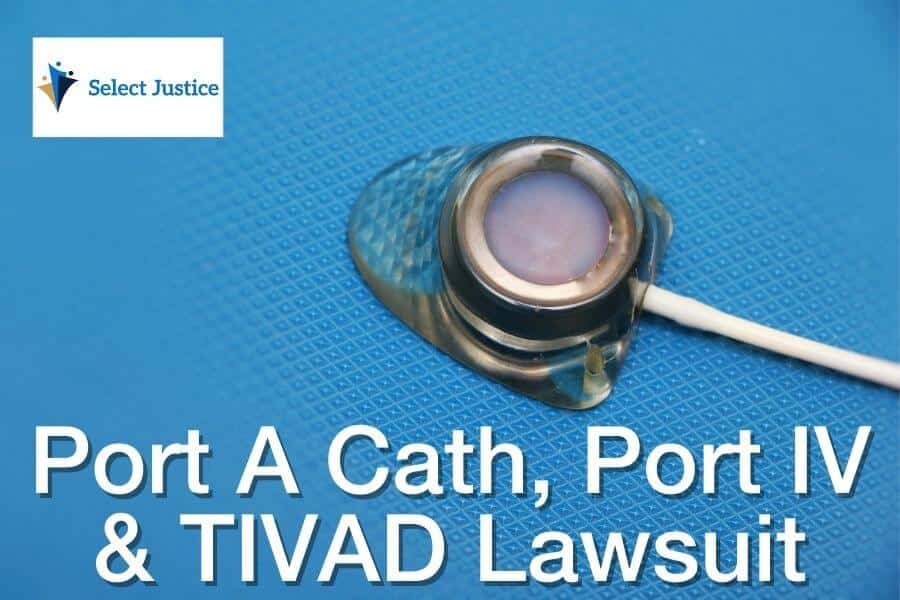 A TIVAD is a Totally Implantable Venous Access Device. It’s a medical instrument placed under the skin with a tube connecting to a vein, allowing medicines to be administered efficiently. As mentioned above, a Port A Cath is an example of a TIVAD.

What Is Port IV?

Port IV is another term for a TIVAD or Port A Cath. IV, in this case, refers to intravenous. When we refer to Port IV, TIVAD, or Port A Cath, it is usually a catch-all term for the implant device that helps deliver medicine to the veins.

Port A Cath law firms are now accepting claims from people who may have been impacted by defective TIVAD devices. As mentioned, there is a vast variety of these devices, produced and marketed by a wide range of companies. As of late 2022, it’s become more and more apparent that many of these devices may be faulty, even dangerous. Port A Cath problems reported by TIVAD lawsuit claimants include leakage, infections, and device failure. Moreover, the worrying aspect is that people depend on these devices for serious medical purposes, including chemotherapy treatments. If they don’t work, there could be a risk of serious injury or death. These revelations, coupled with FDA recall action, have caused a wave of new lawsuits to be filed against TIVAD device producers.

The FDA has recalled numerous Port A Cath devices over the years. Indeed, we can cite several instances of FDA Port A Cath recalls stretching back to 2004. These include a PowerPort duo M.R.I. Implantable Port recall (May 2021), a PORTACATH II POWER P.A.C. Low Profile system recall (June 2020), and a Power Port Implantable Port recall (March 2020). As previously stressed, Port A Caths/TIVADs come under a number of brand names and are manufactured by numerous medical device companies – and it’s always possible that your device is defective but not subject to an FDA recall for Port A Cath. 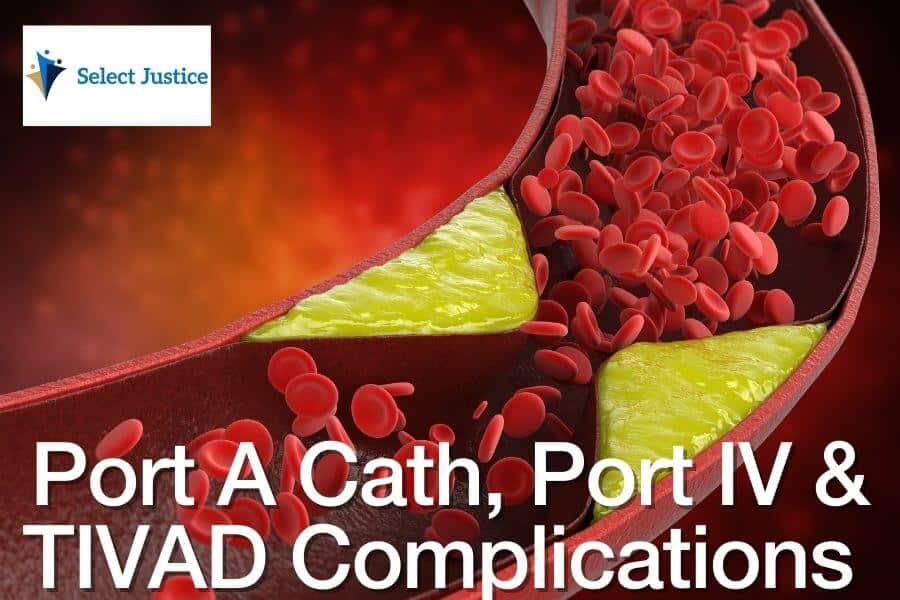 We should be clear that all these types of devices can lead to implanted port complications. The implants are placed underneath the skin (usually close to the heart), so blocking, leakage, movement, and other issues can cause injury. Moreover, it’s worth reiterating that IV ports are used to deliver essential medicines or other fluids like blood. If they do not work, that in itself puts the patient at risk of injury or death.

Right now, we are still learning about the extent of Port A Cath injuries. The hope is that the Port A Cath lawsuits help shine a light on the issue, perhaps uncovering whether there is negligence on the part of the device manufacturers, companies marketing these products, or healthcare companies involved with fitting the devices. In addition, as more people come forward to file lawsuits, we will have more information on the potential injuries caused by the devices. All of these factors could combine to determine how much you can get from a Port A Cath lawsuit payout award, if eligible. Moreover, there is always a possibility that the companies behind the products decide to settle out of court. But at this stage, it’s too soon to tell what will happen.

Personal injury attorneys are calling for people to come forward today if they believe they have been injured by a Port A Cath or related device. Specialized Port A Cath injury law firms are taking on claimants in all 50 states, stating that there is a real chance for those injured by the devices to receive financial compensation. As of now, we don’t know how many people will come forward to file a port implant injury lawsuit, but it is possible that 1000s of people may litigate.

How Do I Join The Port A Cath, Port IV & TIVAD Lawsuit?

If you think you have been injured by a Port A Cath or similar device, or you are representing a family member who has been injured, your first step should be to contact a personal injury lawyer with experience in this kind of litigation. Eligibility can depend on many factors, including the type of device fitted, when it was fitted, and the type of injury caused by Port A Cath. To understand your options, speak to a Port A Cath injury lawyer to get started on your journey toward compensation.

What is a Port A Cath?

Port A Cath is a brand name for a medical device that combines a port and a tube to administer fluid (drugs, medicines, blood, etc.) intravenously. Please note that Port A Caths are also called ports, port IVs, TIVADs, and other brand names.

What is Port A Cath Used For?

A Port A Cath is used by healthcare professionals to deliver medicines or blood into patients’ veins. It is a means of bypassing direct injections, thereby making things more comfortable for the patient and easier for the medical practitioner to administer. It is for this reason that Port A Caths are widely used among people who regularly receive these intravenous treatments, including cancer patients.

Can a Port A Cath move?

Yes. It is possible for Port A Cath to move under the skin, particularly when it has been implanted incorrectly. This can potentially cause injury.

What can go wrong with a Port-A-Cath?

Several things. Those bringing Port A Cath lawsuits claim that the devices have caused various injuries, including blood clots, infections, and bruising. In some cases, a malfunctioning Port A Cath can lead to serious complications, particularly if those using the devices aren’t able to receive the life-saving medications Port A Caths are used for.

What are the Port A Cath complications symptoms?

Port A Cath use can lead to several complications, including blood clots, infection, and bruising. Symptoms range from swelling and redness to other skin discoloration and tenderness.

What is an IV Port?

An IV port is simply another name for a Port A Cath or TIVAD. These devices consist of a port and a catheter. The former is used to house the medicine or fluid, whereas the latter delivers the fluid to the veins.

What is an IV injection Port?

An IV injection port is the same as a Port IV, TIVAD, or Port A Cath. IV stands for intravenous, thus it is a port for injecting into the vein.

Can an IV Port cause an allergic reaction?

TIVAD is a Totally Implantable Venous Access Device, which is synonymous with Port IV or Port A Cath.

What is a Tivad used for?

Like Port a Caths, TIVADs are used to administer fluids like drugs, cancer medicines, or blood to the vein.

The TIVAD device is implanted underneath the skin, usually just above the heart in order to attach to a vein. You cannot access TIVAD without the help of a trained medical practitioner.