Lifting weights, moving a heavy couch out of your house, or even a bad fit of coughing — these are all ways that someone can unintentionally cause a hernia.

Hernias are very common — if you haven’t experienced a hernia, you probably know someone who has. They occur when an organ breaks through weak spots in the muscle wall and causes a bulge. Some people have a genetic predisposition to hernias, while other people may develop them during an injury, pregnancy, lifting heavy weights, constipation and more. Men are more likely to develop hernias than women.

While most aren’t cause for concern, some people can experience hernias that are painful and require surgery. Most often, doctors will choose to use a mesh to repair the hernia and keep it from recurring.

Benefits of Hernia Mesh For Treatment

There’s a few options for treating a hernia that warrants surgery, but the most common procedure is to install a hernia mesh. It’s a very common procedure, with about 1 million hernia surgeries done every year in the United States. During the surgery, the doctor will make an incision at the site of the hernia, move the organ to where it is supposed to be located behind the muscle wall, then use a mesh to repair the part of the damaged muscle wall that allowed the organ to pop through. 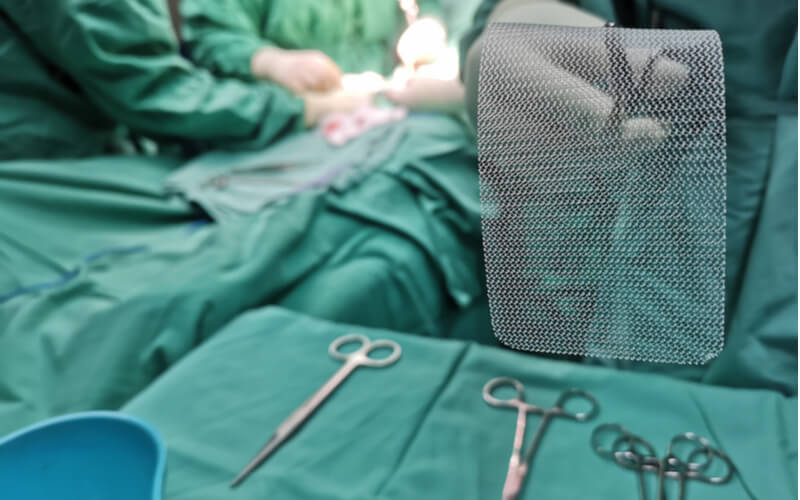 There are many benefits of this surgery, they include the following:

Although it depends on the complexity of the hernia and its size, most surgeons are able to put the organs back into their proper place and install the mesh in about two hours. It’s typically an outpatient procedure and people are able to go home the same day.

People who undergo the surgery recover in just a few weeks and do not need to modify their diet while in recovery. Like any surgery, people may feel groggy or not themselves for a few days as the drugs used during the procedure leave their system — it’s best to plan for someone to stay with you as you recover. A full recovery, which means they can go back to lifting heavy items and other strenuous activity, should take a few months.

By using a mesh, not only is the area where the muscle wall is weak improved, but also the area around it, according to UCI Health. When using stitches alongside synthetic mesh, the rate of recurrence is at its lowest. When using biologic mesh, the recurrence rate is still lower but not as much as with synthetic.

Prior to mesh being used to avoid hernias from returning, doctors would simply suture the muscle wall back together. According to a doctor at Stony Brook Medicine, this can lead to a recurrence of about 25 to 50 percent. This is especially true in larger hernias. With the mesh, however, this drops to the single digits. In a study, it was found that the more experienced the surgeon is, as well as their use of the proper mesh size and improvements in technology, recurrence rates decrease.

Some of the risks include:

Just like any other foreign object put into the body, the mesh can become infected or even rejected. If there is contamination during surgery, the person who underwent the surgery can experience severe abdominal pain, fatigue, flu-like symptoms, redness and irritation by the incision, nausea, and other side effects. In these cases, the mesh needs to be removed. From 2005 to 2018, more than 200,000 units of mesh were recalled by the FDA after they failed or caused complications.

For people who have surgery done in their abdomen — the most common place for hernias to occur — there is a chance of scar tissue developing, bowel obstruction when the intestines adhere to the mesh, or even bowel perforation. Some have also reported erectile dysfunction, a result of the blood supply to the testicles being reduced.

As we mentioned earlier, the introduction of mesh in hernia surgeries caused the recurrence rate to plummet. However, recurrence can and does happen to some people. Lightweight mesh was used by doctors for a time, thought to be an improvement in the field, but after multiple cases of the mesh breaking, some are no longer used. In a study of almost 3,000 patients, heavyweight mesh was seen to have a lower recurrence rate.

If you believe that you or a loved one were harmed by faulty Hernia Mesh, you may be entitled to compensation.