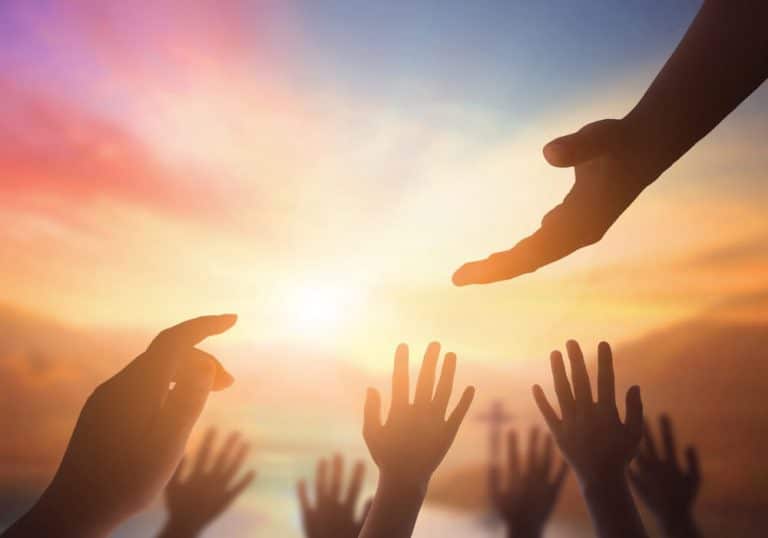 When we hear about cases of sex abuse against children, we are disgusted, angered, and ask the question: How did this happen? We think it can’t happen to us. But the reality is that every nine minutes, a child is sexually assaulted in the United States according to RAINN. And while many of us were raised with the mantra of “stranger danger” 93 percent of people knew their abusers.

Unfortunately, childhood sexual abuse is more prevalent than we would like to admit or even know. Young victims might not speak up until years later, convinced by their abusers that something bad will happen if they do or that it’s their secret. They might also be confused by what happened to them, then as adults feel shame or that they should have done something to stop it.

The good news is that as a society, we are coming to terms with the reality of childhood sex abuse. Not only are there resources for survivors of sexual abuse, but there are always ways their loved ones can help them heal.

Just because an assault happened to someone as a child does not mean that as an adult, they should be “over it” or free from pain. Trauma can take years to process, and people react to trauma in different ways.

Trauma Does Not Go Away Overnight

According to the Women and Gender Advocacy Center at Colorado State University, trauma can manifest through anger, depression, grieving, fear and anxiety, issues with intimate relationships and personal boundaries, and being triggered by situations that remind them of the abuse. Remember, these are all normal reactions to trauma, no matter how recent or long ago the abuse occurred.

However, when these reactions are getting in the way of living a happy and productive life, steps should be taken to reconcile those feelings. After all, everyone deserves to be happy, even if they don’t believe it themselves. An important way to deal with trauma is therapy, a safe space for survivors to talk about their experience, emotions and learn ways to cope with uncomfortable situations and thoughts.

A therapist can be ideal because they are a neutral stranger, rather than a friend or family who you might be embarrassed or ashamed to say certain things to.

RAINN (Rape, Abuse & Incest National Network) suggests finding a therapist who has experience dealing with sexual assault survivors, has a personality you like, and provides the kind of therapy you need. There are many different kinds of therapy, from talk therapy to sessions that will send you home with exercises or “homework” to continue dealing with the issues you are facing.

It might take time to find a therapist or a type of therapy that works best for you, but don’t let that discourage you. For many, therapy has been an important step in the healing process, but it can also take time for someone to be ready to go to therapy.

How To Help Survivors

If someone you care about is a survivor of sexual abuse, acknowledge that it was probably not easy for this person to tell you about their experience. Let them know that you recognize this and that you are someone they can trust through their healing process. Since people heal in different ways, ask how you can be the most helpful to them, whether it’s talking on the phone or participating in an activity that makes them happy.

It’s also important to note that if you are not a professional therapist, you cannot take the place of one. If your loved one’s needs are more than you can handle, it’s OK to recommend that they seek help from a doctor or therapist. It does not make them a failure, and it doesn’t mean you weren’t good enough to help them. Offer to help research therapists or to drive them to their first appointment. You can still be by their side for support.

Abuse Against Boys has Many Myths

While girls are abused at higher rates than boys, society has the painful and misguided stereotype that boys and men cannot be sexually abused, or that it’s “not as bad” when they are.

This is completely false, according to 1in6, an organization that helps male survivors of sexual assault. For one, arousal is a physical response and does not mean that the victim enjoyed the abuse or that it was his fault. Boys and men can also be abused by gay or straight abusers and it is in no way related to their own sexual orientation.

Finally, the abuse of a boy should be taken just as seriously as the abuse of a girl. When all children are left in the care of an adult, it’s expected that they will be treated with respect, but we have learned that this is not always the case.

For more than 100 years, the Boy Scouts of America was a stepping stone in American boyhood, a place where boys learned about honor, duty and skills that they would take with them into adulthood. However, the mounting lawsuits against the organization has brought to light the fact that, just like the controversy in the Catholic Church, even the most respected groups can be a breeding ground for abuse.

Founded in 1910, the Boy Scouts of America’s “perversion files” noted more than 7,800 volunteers had their registrations revoked and identified more than 12,000 victims of sexual abuse. Most survivors are now grown adults, still dealing with the trauma of being abused by people whom they thought they could trust. It’s also broken the rose-colored glasses we have worn for many generations, as communities have learned we need to be wary and vet anyone our children are left with. The more we are willing to discuss these incidents and learn from them, the more future cases we can prevent.

Cases Were Swept Under The Rug

Unfortunately, even after years of accusations and reports of sexual abuse by the Boy Scouts of America, the organization did not address the issue seriously. In fact, multiple scout leaders were removed from the ranks only to be allowed to return as volunteers.

In the very first landmark case for survivors in 2010 - the group’s 100th anniversary - the Boy Scouts of America was found liable for sexual abuse of a 12-year-old boy and was forced to pay $18.5 million in damages. More lawsuits have been filed against them, leading to more than $150 million in settlements and legal costs, and the organization filed for bankruptcy in February 2020.

Had the Boy Scouts of America taken the cases seriously and taken action earlier, who knows how many children would have been spared the long-lasting trauma of sexual abuse. The basis and goals of the group is admirable, and it should have been a place where all children felt safe.

The More We Talk About Abuse The Better

Every survivor’s story is different and each person deals with the trauma in their own way. It’s imperative that communities acknowledge that sexual abuse of children happens; ignoring it will not make it go away.

Survivors need support as they navigate the healing process. We have much to learn about sexual abuse as a society, and taking these cases seriously and believing survivors is the first step.